5 things to learn from Christians in Iraq

By now you’ll know that many of Iraq’s Christians have had a pretty bad few decades. Increasing persecution and extremism saw many flee in the years after the Iraq war. Now, the so called Islamic State has targeted many, pushing them out of homes, towns and entire regions.

The events caused a shock among Iraqi Christians. But in their darkest nightmare, they also felt God’s presence and guidance. Here are 7 things they learned from the Lord in the crisis.

1. “Collect a fortune in heaven, not on earth”

“I was a successful businessman involved in calf breeding in Qaraqosh. I had three houses and a lot of land. I come from a tradition which teaches that if you do not have land, you have nothing. But due to the IS attack on our city, I lost everything I had in one day. When I became displaced I started to reflect on what I had been doing in the past. Now I believe that ISIS was a lesson from God to teach me not to collect a fortune here, but to make a fortune with God. And I believe that if you do so He will always help you.”

Millions have lost everything, but some have found Christ.

2. “Know your identity in Christ”

“The recent crisis with the so-called Islamic State was a wake-up call. It urged our congregation to think about our identity as Christians. For us as a church, the influx of internally displaced people has given us the opportunity to ‘practice Christianity’ as I call it, to help all who are in need; it doesn’t matter if they are a Christians or not. God asked us to be gracious to all. Millions have lost everything, but some have found Christ. This is also important to know for the Christians around the world. If your Christian identity is strong and you know who you are in Christ, you can resist the bad influences from outside.”

3. “A crisis doesn’t mean the end of the church”

“Not even the worst circumstances can make me doubt the guidance of the Holy Spirit. I lost my village, my church, and now I am losing many church members who are emigrating abroad. But I see things with the light of God. When Jesus died, everyone thought it was the end of the church. But three days later Jesus rose from the dead and now we know that his death was just the beginning of the church. I believe this crisis might mark a new beginning for the church of Iraq as well. We need to learn to trust the Lord in this situation, trust in His goodness.”

4. “Spending time with God will change your life”

“After we were displaced, I had nothing to do. For this reason I went to church more often. After a while I joined a Bible study group and started helping in church. By spending so much time with God, I became very close to Him. I now feel a peace in my heart, a peace in my life, I didn’t know before. I know that God is with me. It changed my life. Before the displacement I was an angry person, I always wanted to have it my way. But now I have learned to be more patient and to forgive the people who hurt me.”

By following the Lord together, many of us now feel the power to go back to our village and rebuild it again once it’s liberated.”

5. “Fellowship with other Christians will help you serve Jesus”

“I teach my youth group to apply Jesus’ words together. We gather for prayer each week, but also encourage each other in everyday life. We are friends to each other and to the people of our displaced village, especially the children and the elderly. By following the Lord together, many of us now feel the power to go back to our village and rebuild it again once it’s liberated.” 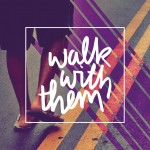 Want to help: Walk With Them

If you want to help your church family in Iraq then why not host a sponsored walk and spend time raising money, prayer and connecting with the stories of those who have lost nearly everything fleeing war and terror.