A history lesson with Brother Andrew

On 15 July 1955, a young man called Andrew stepped off the train in Warsaw’s Central Station, carrying a suitcase containing a change of clothes, and hundreds of booklets with the title ‘The Way of Salvation’. He’d travelled to a youth communist festival, with the aim of telling young people the truth of Jesus.

That trip changed his life. There, behind the Iron Curtain, he first met Christians who were persecuted for their faith. Ever since that day Brother Andrew, as he’s now known, has dedicated himself to the task of supporting and strengthening persecuted Christians, first in the Communist countries of Europe, then further afield.

This was the beginning of Open Doors.

Thanks to Brother Andrew’s desire to say ‘Yes’ to God’s promptings, Open Doors now works in over 60 countries around the world, supporting and strengthening the church in the midst of trial and persecution.

Here he explains a little more about the heart behind Open Doors, and how we can respond to the increasingly obvious persecution of Christians around the world.

What is the difference between ministry in Communist countries versus Islamic countries?

Islam is a much stronger movement. Communism lasted barely seventy years in Russia and Eastern Europe. Islam has already been around for 1,400 years. Islam is based on monotheism and a holy book. The challenge of Communism is the stupid proclamation, ‘There is no God.’ The challenge of Islam is, ‘Who is God?’ We know that many Muslims are motivated to die for their faith. If we don’t come up with an answer, Islam will continue to grow and attract more volunteers willing to blow themselves up as self-proclaimed martyrs. 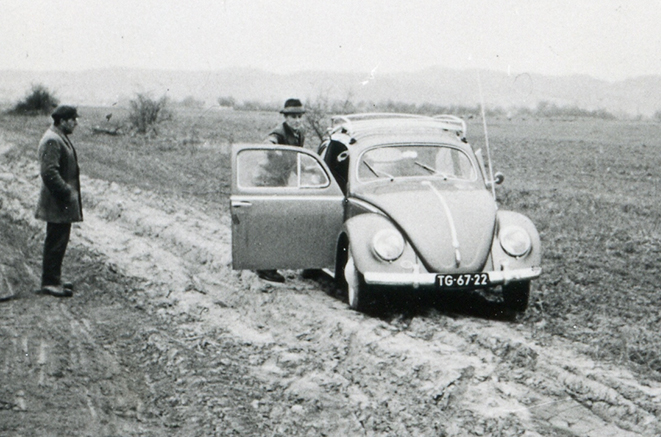 Image: On an early Bible smuggling trip with the now infamous VW Beatle

Did you know this was to be the next area of ministry?

Not immediately. You need to understand, I never wanted to start a ministry. I simply went on one trip to Poland in 1955, to the Communist Youth Festival. Shortly after that I had the opportunity to go to Czechoslovakia. I found the church in both countries, discovered their need, and started bringing Bibles. There was no plan, no vision, certainly no thought about leading a worldwide organisation. God revealed a need I could meet and I did what I could. Others joined me, the work grew, and people in other countries – South Africa was the first in 1970, after the Netherlands, of course, followed by Australia and Switzerland, then the USA and the UK.

If we don’t come up with an answer, Islam will continue to grow and attract more volunteers willing to blow themselves up as self-proclaimed martyrs.

Was the mission of Open Doors just to deliver Bibles to believers who had no access to them?

It was more than that. Everywhere I go I seek my brothers and sisters in Christ. I listen to their stories. I encourage them and pray with them. If Open Doors can help strengthen the church in the midst of persecution, that’s what we do.

When I first discovered a persecuted church behind the Iron Curtain, the need was for Bibles. I’ve always believed that no government or religious authority has the right to prevent people from having and reading the Bible. But as our ministry expanded, other needs emerged. For example, in some countries pastors have little or no seminary training. We provide them with training so they can be more effective leaders of their congregations.

In other regions, Christians are discriminated against, denied education and quality job opportunities. So we may strengthen the church by providing small loans to help Christians start businesses. The needs and thus the strategies vary from country to country. 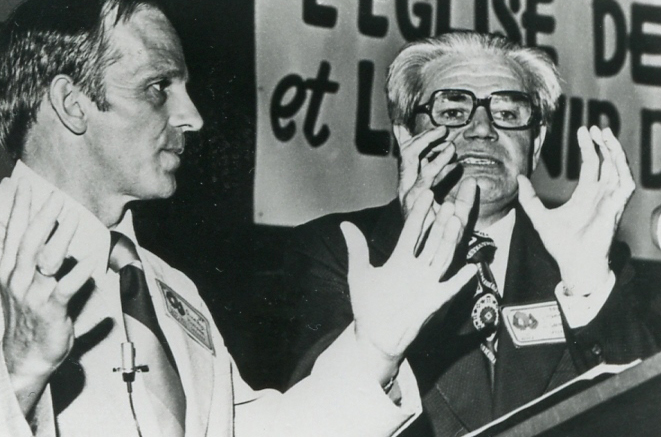 Image: Preaching at the Love Africa conference in the 1970s

Right now persecution seems on the rise. Islamic State are causing havoc in Iraq and Syria and there are regular attacks by Muslim extremists on Christians in Nigeria and Kenya. How should we respond?

As I’ve said many times, the battle is on! When we read about the conflicts in Nigeria and Somalia and throughout Africa, when we hear about Christians imprisoned in Iran, when we see the advances of the Taliban and how they now publicly support IS, we must realise that the battle is first and foremost spiritual. The devil will do everything possible to thwart the advance of God’s kingdom. Jesus told us that if the world hated Him, it will also hate us. So we must not be surprised by the increase in persecution around the world.

For the most part I feel Christians are afraid and therefore on the defensive. God did not call us to defend ourselves or our church, or Christianity in general. He calls us to be on the offensive.

However, we are not weak. There is much we can do, starting on our knees. I can no longer travel and see my brothers and my friends, but I can pray. Recently I’ve been challenging Christians to be more aggressive. For the most part I feel Christians are afraid and therefore on the defensive. God did not call us to defend ourselves or our church, or Christianity in general. He calls us to be on the offensive. From Matthew 28, Jesus says go therefore, aggressively, and make all nations my disciples – that includes all the ethnic minorities and majorities.

In other words, we must do everything possible to reach people and advance the cause of the gospel. The very first generation of Christians did just that. That’s why they were unbeatable! So let’s accept the challenge of the Great Commission. Let’s be obedient to the call of our Lord. I hope that my life demonstrates that there is no more exciting mission than following Jesus wherever He leads us.