About 3 years ago now, I remember being sat at the top of my stairs passively pressing play on video about the Open Doors’ Save Syria campaign. As the music started to play, the pictures of Syria and the stories of Christians laying down their lives for the sake of spreading the hope of Jesus stirred me to my core. With tears in my eyes and goose-bumps all over, I was captivated.

Naturally, our reaction to videos such as this is to pray and perhaps shed a few tears but inevitably, life moves on. We find ourselves indulging again in our freedom of speech, expression and religion, giving little thought to the possibility of life without such privileges. But let’s consider that for a second – imagine waking up one morning to your house emblazoned with graffiti exposing your faith to all who pass by. Embarrassed? Worried what your neighbours might say? Imagine that, but this time in a country where you are sure to face rejection, abuse or even death purely for this label – this the story of many Christians in Iraq and Syria today following the growing influence of IS.

“If the terrorists come to kill us, there will be blood, but we will open our eyes in heaven – but we must tell them first that Jesus loves them!”

Syria is a country rooted in Christian heritage as home to many of our Bible stories from the Sermon on the Mount to Jesus feeding the five thousand, the Transfiguration to the place where Saul, ultimate hater of all things Christian, encountered the voice of God on the road to Damascus. This is a place where Jesus walked, where he taught, and sadly, where Christians have faced persecution for thousands of years. Today, as the video explains, the church in Syria is on its knees. But, despite the darkness falling, Christians are choosing to stay and be the light Syria so desperately needs.

I want to tell you more about the Pastor Youseff the video introduces us to. Along with his wife Hannah, they came to speak at an Open Doors event and shared what life is like for them. They begin every day in prayer and part by asking the Lord to let them meet again at the end of the day – believing that they are where they are meant to be. Hannah told us that in all of this, the thing burdening her most was the fear her girls would come to harm; she describes God asking whether she was prepared to give herself, and here was her response, telling her girls, “if the terrorists come to kill us, there will be blood, but we will open our eyes in heaven – but we must tell them first that Jesus loves them!”

Hannah and Youseff are a couple living out Psalm 84:10, declaring every day: “Better is one day in your courts than a thousand elsewhere”. They are living in the shadow of their fears but guarded by the promise of a God who is good and has an eternal home destined for them regardless of what their day holds. They live grounded in the truth that God is for His people, and “if God is for us, who can be against us?” (Romans 8:31).

What would life look like for you if you started your day on your knees declaring this, then got up and lived like you actually believed this was true?

Sadly, the story told 3 years ago is much the same today. By 2015, 63 churches had been destroyed, Christians continue to be seen as enemies by rebel groups and around half the Christians living in Syria prior to the Civil War have now fled. Casualties continue to rise, the number of children affected by the war ever increases and the trauma left in the dust of each attack haunts any sense of hope for the Syrian people. But, as the video says, Jesus, who was no stranger to devastation and paid the ultimate price at the hands of persecutors, calls us to be the light in darkness:

“You are the light of the world. A city set on a hill cannot be hidden. Nor do people light a lamp and put it under a basket, but on a stand, and it gives light to all in the house. In the same way, let your light shine before others, so that they may see your good works and give glory to your Father who is in heaven.” – Matthew 5:14-16 (ESV)

Stories like these should shake us. They should change the way we hold our faith, the way we pray, the way we approach evangelism. It should encourage us to support the persecuted church, to pray, to give, to petition. But it should also challenge us to step out ourselves with greater confidence and appreciation of the freedom we are so blessed to have. It’s not easy to talk about Jesus, it never is, but the truth for every Christian living on the earth is that He calls us live Him out, but never leaves us to do it alone (Matthew 28:16-20).

He is FOR US. And if He is for us, then what on earth can be against us? 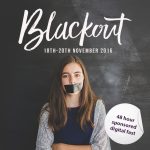 Blackout and bring hope to the Middle East

Take part in Blackout, our sponsored digital fast and spend a weekend offline, raising prayer, money and awareness for Christians in Iraq and Syria.

The Author
Rachel Watts is a 21 year old student at the University of Bath studying Politics and International Relations. She is currently on a placement year, doing some work with Open Doors, working for an MP and heading out to the South African sunshine with a charity called LIV Village in 2017. She loves a good coffee, being in forests, people who smile at you randomly and has a deep, deep love for peanut butter.