How to get a Bible into an Iranian prison

Mojtaba is 30-years-old. He was one of the leaders of a quickly growing house church movement in Iran. He was imprisoned for three years in 2012.

God was with Mojtaba during his prison time. But this didn’t make prison life comfortable. He slept surrounded by murderers and robbers and ate with drug dealers. No one could be trusted. When he would be released was unclear to him.

“I felt a deep fear inside of me,” he said. “And often, even though the Lord was close, I was sad about my situation.”

“That is the moment I realised that I was nothing. My hands were tied, my voice wouldn’t be heard by human beings.”

When all certainties were taken away from him, Mojtaba once again realised his dependency on God.

“So, I prayed; that was all I could do. At first they were prayers of repentance. I thought God was punishing me for my mistakes by putting me into prison.”

Then the Lord spoke to him. “He said: ‘Stop being selfish Mojtaba, it’s not about you, it’s about Me. Look around you.’”

For the first time Mojtaba started looking around with God’s eyes.

“I saw poor people, people who had committed the worst crimes. People that felt so alone. And God spoke again to me, saying: ‘It is time that you share My word with them, that you share Me with them. They need Me.’”

A Light In The Prison

“It is funny how God works sometimes. It would have been absolutely impossible for us to pass the big gates of prison to bring the gospel to those who needed him so badly inside. But God just placed me and other Christians inside the prison among them, to shine His light.”

Mojtaba started sharing the gospel with his fellow prisoners. Some came to faith, others were just very happy he wanted to pray with them in Jesus’ name. But there was one thing missing.

“I asked the guards for a Bible many times, but I didn’t get one. None of the Christians did.”

This time God intervened in a special way.

“Something really strange happened. The prison Imam, who came in every day to pray with the Muslim prisoners, offered to help us. He was impressed by our commitment to our God. I think it was God who filled his heart with kindness for us.”

Image: A handwritten copy of the New Testament in Farsi.

Bringing in a real Bible is impossible, but the Imam had an idea – he brought in printouts of the Bible in English as an English lesson.

“One of my friends was good at English, so he translated these Bible parts into Farsi. Then I copied these texts and gave them to the prisoners who had requested them because they were curious about our faith and to those who had already given their heart to Jesus.”

Soon it became known among the prisoners that Bible verses were circulating.

“We even got requests from other wards, where the verses also had ended up. People were asking us for more. And the best thing was that prisoners were giving their lives to the Jesus of the Bible.”

“I never prayed for God to release me from prison,” Mojtaba said, reflecting on his time behind bars.

“I can serve God anywhere, inside or outside of prison. It doesn’t matter what situation I’m in, I can work in God’s kingdom wherever God places me. And at that time God placed me among the prisoners.”

He urged us to pray for his country and for those who are in prison for their faith now.

“My prayer for all Iranians is that they hear the good message of Christ. And for the Christians who are under pressure, I hope and pray that they can experience the big contrast that I felt, that they might not be in a good situation but that they feel an inner peace and joy because they know Jesus.” 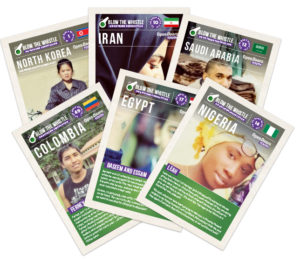 Iran are at the World Cup!

Iran are one of the teams represented at this years World Cup! Download our ‘Pray when they play’ cards to pray for and cheer on Christians in Iran during their games at the tournament! Check out our special ‘Blow the Whistle’ page for more resources and ideas…

Mojtaba is a man of guts and courage. He didn’t lose hope and kept sharing his faith even when in prison. How can we be bolder, braver and more passionate about sharing our faith with all the freedom we have? Can we get inspired by Mojtaba to get over our embarrassment and tell our mates about Jesus? To help, make sure you get our free ‘Guts and Courage’ devotional and explore more stories of passion and boldness from young, persecuted Christians!