“God was there, always…”

On his 16th birthday, Al-Quaida sent his family a death threat. When he was 29, he barely escaped from the so-called Islamic State. Five years ago, the church he was serving in became a shelter for hundreds of displaced people. Now, young church leader Daniel looks back on how God has been present, despite war, doubt and terror.

His church is no longer home to thousands of displaced people – many have returned to their homes or left Iraq altogether – but Daniel still serves congregations both in Erbil and Kirkuk.

“I am convinced it was Jesus himself..”

He explains that despite the hardships, God was there, always. Sometimes very literally. “I remember a man who, out of the blue, gave me an envelope with a large amount of money for children’s activities. Just what we needed, and what we had prayed for.

“When I asked him who he was, and if he wanted to be involved in the organization of the activities, he said: ‘My name is Fadi and you will see me in church everyday’.

In Arabic Fadi means ‘someone who sacrifices himself’. It’s a name we use for Jesus. I am convinced it was Jesus himself that gave me the money that day. It was very special. I still see his face in my memory. I never saw the man again.”

And this isn’t the only story Daniel has. Every day little miracles like this were happening: “It’s so beautiful to experience this. To experience that God exists, that His grace is surrounding you. All the people He sent to help us. I felt so blessed.

“God is my rock, my only supporter. When I feel down, the only one that can help me is God. He is always around me and sends people to help me. Really, I can’t do my work without Him. 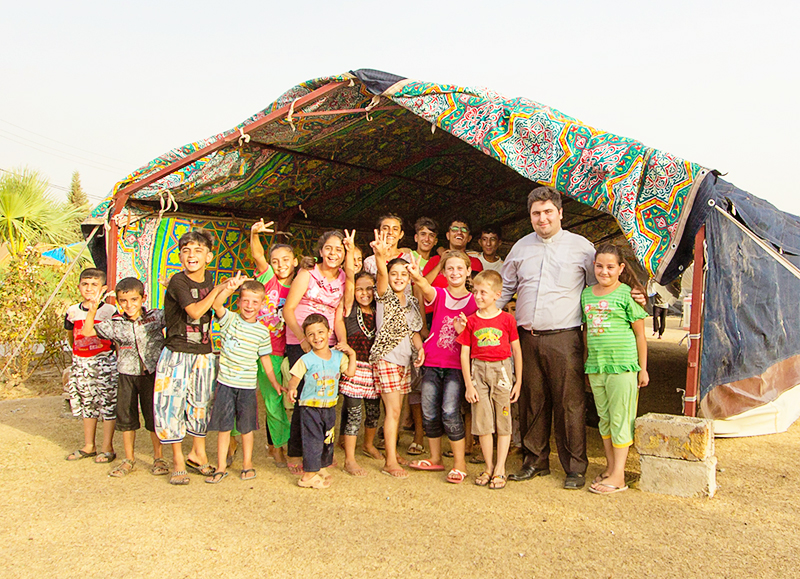 Image: Father Daniel, back in 2014 when thousands fled and found shelter in his church

“You know,” says father Daniel. “Before the crisis, I doubted my calling. I switched from studying medicine to the priesthood, a choice a lot of people didn’t understand. And, to be honest, I started to doubt my choice too in 2012. I asked God for a sign to confirm my calling to be a church leader. The answer came the 7th of August 2014, when my church became a shelter for many. This was God’s sign that He needed me to serve Him here.”

Father Daniel had only one encounter with the source of the displacement: the extremists of the so-called Islamic State. And then, as always, God took care of him.

“I was heading to Kirkuk with my driver. I don’t know how but at some point, we approached a checkpoint. We were shocked when we saw who manned it – the terrorists of Islamic State.”

“I was wearing a plain white shirt, not my priest collar. We gave them our IDs and kept quiet, not wanting them to know who we were. ‘Why aren’t you talking to us?’ the terrorist said angrily. Then my driver hit the gas and drove away as fast as possible. We escaped without a scratch.”

Father Daniel is now helping his people to deal with the effects of the crisis and the new challenges they find on their path. Recently he opened a new trauma care centre in Kirkuk. “If the crisis taught me anything, it’s that it’s my duty as a priest, and as a human being, to help people in need,” he says.

God with us: Christmas Syria resource!

We’re just putting the finishing touches on our new, special Christmas resource, God with us. It’s a simple youth / small group resource focussing in on Syria. You can download a copy today, to use in your groups in the run up to Christmas.