When you think about the birth of Jesus, what comes to mind? Shepherds, wise men, angels, gold, frankincense, myrrh or the song ‘little donkey’? We think about that first Christmas with a kind of nostalgia, as something lovely and heart-warming. But the reality is, it was a hectic, chaotic mess – and that’s just the bits we focus on.

Jesus was born in a humble place, into a messy world, visited by some of the poorest (shepherds) and wealthiest (wise men) in society. And what’s more, we often skip over the harshest part – the fact that baby Jesus became a refugee within months (or a least years) of His birth.

He was targeted and hunted. His family had to take him to another country, whilst Herod – a crazed leader – went on the rampage, slaughtering hundreds of babies to ensure his own rule. It’s not often you see that on a card – Happy Christmas!

This is part of who Jesus is. This is part of His story: a displaced refugee looking for safety and protection in a foreign land. Just remember what Christmas is all about – Jesus, the Word made flesh – when God, the almighty creator, folded himself into a tiny, vulnerable baby to help build a relationship between God and us. And that reality is significant, because Jesus knows what it is to be a target, to be rejected – to be a focus of anger and hate.

Because of their faith in Him, many know what it is to be a refugee.

And Jesus is with them in those experiences. He’s been through it. He understands. He’s not above it. The nativity story shows He’s in the middle of it – He’s there, right in the mess and strife of all our lives. Jesus, Emmanuel, God with us.

Just look at this picture. 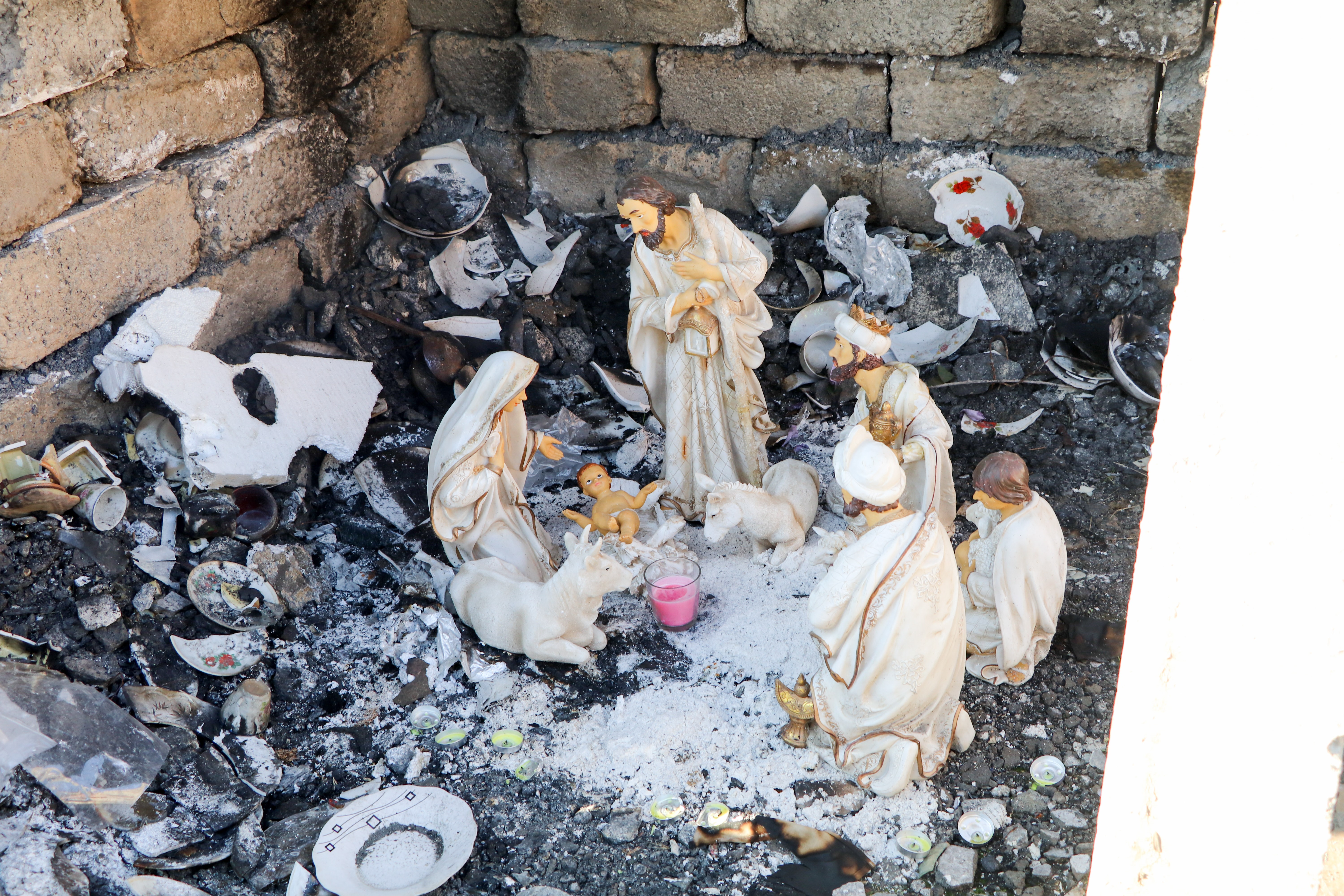 In the midst of destruction, violence and devastation, God is with us.

It’s of a nativity scene. The picture was taken in a largely Christian village called Karamles in Iraq. The village was taken over by the extremists of the so-called Islamic State (IS) in 2014. All the Christians fled. Over two years later, after IS were driven out, Christians began to return, but they found their homes burned, looted, vandalised or destroyed. This scene was laid out in the ruins of a house the first Christmas that people returned.

The picture is ultimately about defiance and hope. In the midst of destruction, violence and devastation, God is with us. No matter what we’re going through, what we’ve experienced and where we’ve come from, God is here, right with us. That’s the message of the first Christmas, and it’s still relevant today. Check out this quote from Pastor Edward in Syria:

“How can one celebrate and at the same time be full of wounds inside? This is a contradiction in some way. But the real Christmas 2000 years ago was the same. When Christ was born it wasn’t Christmas celebrations all over. When He was born it was dark and it was hostility all around. There were broken hearts and pain everywhere; that is what justifies His work. This is why He came. Because this is our situation. So we really like to shed light on how the message of Christmas can be the answer to our pain and the hostilities that are going on around us.”

As a response, please commit to praying for your persecuted family this Christmas. Start by praying this prayer that was written after by Syrian Christians after a car bomb exploded in their community.

Lord Jesus, this Christmas be with Christians in Syria. May the wounded and traumatised know your presence and healing. May Christian communities shine as lights of peace and hope. May peace be established in Syria, and the rule of law be applied equally for all citizens, irrespective of ethnicity, religion or other status. And may all people of violence respond to the love of God and the gift of new life through Jesus. You are Emmanuel, God with us. Be with us this Christmas and be with Christians in Syria and across the Middle East. Amen.

Do more this Christmas!

1. Download our free ‘God with us’ youth/small group session and work through material like this with your youth or small group…
2. Send a Christmas message of hope to young Christians in Algeria whose churches have been forcibly closed…