I recently heard about an 18 year old girl called Deborah from Ethiopia. She had a heart for telling people about Jesus and decided to host a month long evangelism training programme for other young people in her Church. There were three girls who attended who were particularly inspired by what Deborah shared with them.

Eden, Mihret and Gifti were all around 14 years old and they had all become Christians when they were little. In response to what they had heard from Deborah they decided that for the rest of the school holidays they were going to tell at least one person about Jesus every day.

They were fearless and unashamed about doing this, telling everyone they could about Jesus whether it was in private or in public, whether the sun was shining or the rain was pouring – it didn’t matter, nothing could stop them from telling people about Jesus. They told their friends, they told their families and even random people in the street. Eden shared the gospel with the local butcher who, in response, confessed his sins, committed his life to Jesus and wanted to pray right there and then in front of everyone. The bystanders laughed and mocked them, but the girls were not put off.

Their families were getting worried; they knew that what their daughters were doing could get them in trouble. One day those fears became reality when a local sheikh got his hands on one of the booklets the girls were using and complained to the local authorities. Eden was the first to be called in and questioned.

“Where did you get this book?!” The furious officers shouted over and over again. Eden said nothing, not wanting to get Deborah in trouble. But the interrogation grew hostile and violent, eventually they got it out of Eden: Deborah gave her the book.

Deborah was immediately arrested along with Mihret and Gifti, who, with Eden were all underaged. They were told that they could be in prison for the next 15 years.

While they were in prison, some of our partners visited them and grew increasingly concerned for them, especially when they started to see signs of physical abuse. They called upon the world to pray for the girls and after three months of being in and out of court, the girls were released.

Our colleagues arranged trauma care for them and spent time encouraging and supporting them. Those supporting the girls expected them to be frightened defeated, but instead they heard how God had been doing remarkable things during their time in prison, and how the faith of these young girls was stronger than ever.

We need to stand firm even when trouble comes. We must never give up. God is in charge

“God did not make us go through difficulties alone. God made a way when we thought there was no hope,” Eden said. “We need to stand firm even when trouble comes. We must never give up. God is in charge.”

“I am a witness that God is with everyone who makes sacrifices for the sake of the gospel and gives them joy. In prison we came to learn that God never leaves us to face hard times alone. He took our burden upon Himself and gave us peace and comfort in the storm. I am so excited to have experienced this,” Deborah testified.

“As Christians, we should expect persecution. This [suffering in prison] was an honour for us. During those three months in prison we had an amazing time of prayer, fasting, Bible study and song. We became unafraid,” Gifti told the visitors.

And not only did He keep their faith intact, He also enabled them to courageously keep sharing their faith with other prisoners.

“Fourteen people heard the gospel, and we asked each person who visited us to bring Bibles to give to these hearers. All of them gladly received these Bibles. Many of those we talked to were frustrated by a life without hope. The fact that the Lord gave us four souls eager to accept Jesus made our stay in jail amazing,” Deborah excitedly shared. “We thank everyone who prayed for us while we were in prison.”

Struggling to hold back tears, Eden declared, “Above all I am so happy to think that He allowed me to be called His child and led me along this journey of righteousness; I did not deserve it. Whenever I kneel in prayer I plead for my friends to come to the truth where our souls are satisfied. I feel miserable about those who remain in darkness.” 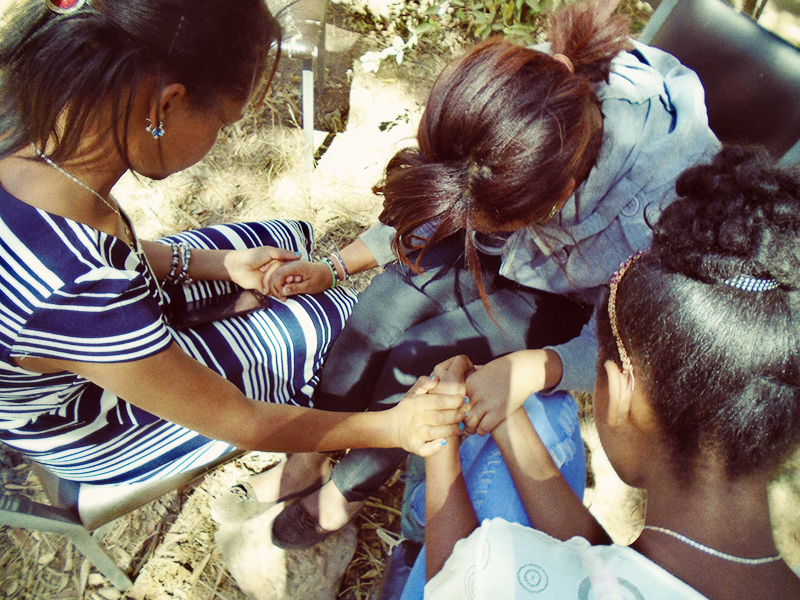 Eden, Gifti and Mihret praying together after their release

These girls were full of guts, passion and courage. They didn’t lose hope and kept sharing their faith even when in prison. They truly are amazing examples to us. How can we be bolder, braver and more passionate about sharing our faith with all the freedom we have? Can we get inspired by Deborah, Eden, Mihret and Gifti to get over our embarrassment and tell our mates about Jesus? To help, make sure you get our free ‘Guts and Courage’ devotional and explore more stories of passion and boldness from young, persecuted Christians!

The Author
Caris Works for Open Doors, being part of our small, but perfectly formed, Youth team. In her role she travels about the country, speaking to youth groups and various organisations about the amazing, passionate faith of persecuted Christians. She loves to travel as much as she can... Caris fact: In 2017 she took over 30 flights!