What if your family rejected you because of your belief in Jesus? Would you leave home, family and community? Tough choice, but it’s one that Cheu had to make. He was bought up in a Buddhist family in Laos, a place with very tight-knit families living in equally tight-knit communities.

Cheu is a relatively new follower of Jesus. He’s just 20. He’s married and has a 4-month-old baby. But pretty much straight after his decision to commit to Christianity he began facing threats, abuse and worse because of his decision.

“My wife was sick. She had a stomachache, and we went to see the shaman of our village and he told us that we should offer a lot of animals like a cow, pig, and other things in order for her to be healed. My family is very poor and we could not afford to buy all that the shaman had requested we offer. It was this incident that led us to know Jesus.”

He approached Lha*, his uncle who is a Christian, and asked him to pray for his wife. She was healed and that incident triggered something in Cheu. He began to seek God and pray about what the Lord wanted him to do with his life. He accepted Jesus Christ as his Saviour and slowly began living a life of Christlikeness, but persecution soon followed.

“I already knew that persecution would come, that someone would persecute me. It did happen.”

“One day, my brother and uncle came to me and lied to me. They invited me to go to their house which I agreed to without hesitation. Little did I know that when we arrived at my uncle’s house, they would beat me and tie me up with a rope. They told me that I needed to return to my old faith and that they would continue to beat me if I didn’t deny Christ. They bound me with a rope with my hands behind my back. The same rope was also used by my brother to hit me over and over again. I was tied from seven in the morning until seven in the evening.” 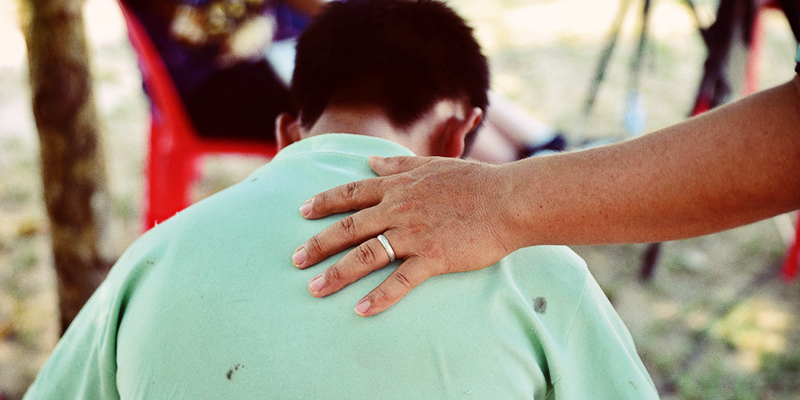 “At that time, my wife was still pregnant. On the day that it happened, I sent my wife to my in-laws in another village. After sending my wife away, I went home and my uncle and brother came to get my motorcycle. They tied me up and said that I should go back to my old faith, the Hmong culture. ‘If you won’t go back, we will hit you until you die,’ they told me.”

Nearing dusk, he asked the Lord in prayer for guidance. “After that, I prayed and prayed and told God to forgive them and myself. After praying, I lied to my brother and uncle and other people and told them that I would return to my old faith. So they untied me. After they took off my ties, I slept at my house. I went to my wife very early the next morning to pick her up since my in law’s house is very far from my house. We hopped on a bus to escape and came here. Until now, my uncle and brother and my family still don’t know where I am, and I heard that they are looking for me. I also heard that if return to our home in our village, they would hit me over and over again until I die.”

Nothing can stop my belief now… I will continue believing in Jesus instead. I will sacrifice myself to God.

Cheu and his small family have been welcomed by a community of Christian families in Ban Neuk*, a church in Vientiane Province 24 hours away by bus from his province. This church is always open to the needy. A family that provides and defends. A family given to Cheu and his wife by the Lord.

“Though I miss my mother, and despite what happened to me, I am still very happy that I believe in Jesus. I can worship Him and I can believe and I have peace in my heart. For me, I will stay here in this village and I will live here because I can worship and nurture my faith freely. Nothing can stop my belief now, and I will not go back to the Hmong culture of worship. I will continue believing in Jesus instead. I will sacrifice myself to God. I will follow however God wants me to do. I will follow.”

One of Cheu’s favourite verses is Luke 19:9-10: “Salvation has come to this home today, for this man has shown himself to be a true son of Abraham. For the Son of Man came to seek and save those who are lost.” This is a passage that Cheu know’s the truth of intimately. Pray for him and his family as they adjust to their new life.

Laos is number 24 on the Open Doors 2017 World Watch List. In the country Christianity is viewed as a ‘Western ideology’ and those who adhere to it are considered to be foreign agents and enemies. So Laotian believers must be extremely cautious. The Marxist-Leninist government monitors all Christian churches, and conversions, evangelism and church activities all require government permission – not having authorisation could mean arrest. Christian converts from Buddhism or ethnic-animism face persecution from local authorities, since every conversion brings shame to the community. Laotian believers may also be physically attacked or expelled from their communities.

*Name and locations changed for security