Kristin, Director of Advocacy at Open Doors USA chronicles her visits with Syrian refugees in Lebanon, witnessing firsthand the work of Open Doors in the region.

I’m climbing a hill that overlooks one of the largest refugee camps in Lebanon’s Bekaa Valley. Children are tugging at my shirt and pointing at their tent homes in the valley below, their laughter echoing across the quiet plain.

Unlike Turkey and Jordan, Lebanon doesn’t have officially organized camps for Syrian refugees. But in the Bekaa Valley there are numerous “informal tented settlements” where refugees are staying. 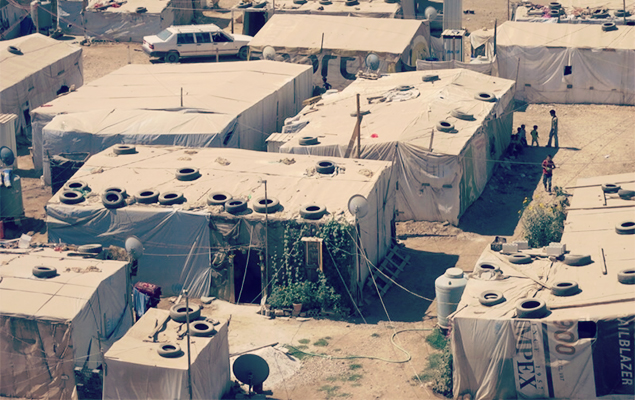 Here at the camp I am visiting, fifteen minutes from the Syrian border and only an hour from where ISIS kidnapped 19 Lebanese soldiers weeks ago, many refugees struggle to sleep at night. Having survived brutal barrel bomb attacks many refugees I’m speaking with express that all they want is a safe place to stay. But now, with stories of ISIS terror circulating in the area, families are feeling far from secure.

“They aren’t here yet,” one refugee tells me, “but what if they come and attack us at night?”

In the midst of the fear and desperation of this place, Open Doors is working to provide not only practical aid and relief but encouragement and spiritual support. I’m amazed to see storage rooms full of boxes of aid that include rice, beans, canned soups, noodles, and crackers, all destined for refugee families in need.

I’m immediately struck by the relational aspect of our work on the ground. Open Doors isn’t just providing boxes of aid, but seeking to restore lives in a holistic approach that includes trauma counseling, child friendly spaces, and schools for children who have missed out on years of their education due to the conflict.

I love to see how our partners on the ground interact with these refugee families on such a personal level. They are asking about their lives, their children, how they are feeling today, how we can pray for them. In each tent that we visit, both Muslim or Christian, the families are asking for prayer.

The stories of what led them here are heartbreaking.

“They were bombing us from either side. There was nowhere safe to go,” one man recounts of the day his family fled Syria.

Today, he worries about a lot of things. He and his family have no money, no resources, no work. But there is one thing that consumes his mind more than anything else.

“My children…” he trails off and I hear his voice break a little as he looks over at them playing in the corner of the tent. “I want all countries to see these children.” 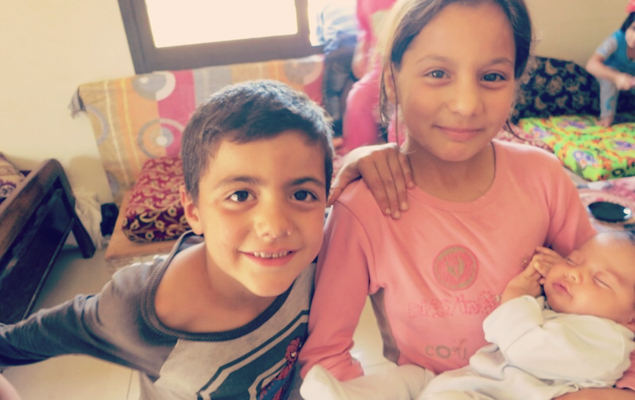 I can’t help but think of the tragedy of it all.

Millions of Syrian children are living the most formative years of their lives in a war zone. They are watching their neighborhoods and schools blown apart by barrel bombs, family members killed before their eyes. Once they flee Syria, there are limited prospects for education, and even fewer prospects for healing.

That’s why I’m grateful to visit the schools that Open Doors is funding for these children. I’m humbled to talk to some of the most courageous and creative people I have met so far: teachers who are investing deeply in these precious lives.

Where there aren’t schools, Open Doors is investing in “child friendly spaces,” dedicated areas within Syria and Lebanon where children can go to simply be children. In these supervised spaces they can play games, draw pictures, eat snacks. It’s a small step toward reclaiming thousands of lost childhoods.

I’m finding that there are universal needs among the refugees that I visit. Beyond the basics of shelter, food, education for their children, protection from harm and discrimination, without exception they desperately want their voices to be heard.

I hope you will join me in supporting our crucial work on the ground. In the midst of this horrible conflict, it truly is possible to make a difference in the lives of women, men, and children. Through your involvement with Open Doors in this region, you are making that difference. Thank you for your support!

You can give now to our Syria fund – just head to the link below to make a donation and choose relief packs for Syria. £4 will provide a relief pack full of supplies to support someone for one week. Alternatively you can also buy a #weareN tshirt – all proceeds go to our work in Iraq and Syria.

We’re joining with a coalition of NGOs to bring the suffering Syrian population back into the centre of the debate, where they belong. The #WithSyria campaign calls on people to stand in solidarity with victims of the Syrian conflict. We have worked closely with the church in Syria to call on world leaders to act now to end the bombing of Syrian civilians. Watch the video, sign the petition and pray.

The Author
Kristin is director of Advocacy at Open Doors USA. You can follow her on Twitter @bykristinwright