In southern India, Hindu extremism is on the rise. This is having a massive impact on Christians. Violence, intimidation and threats are becoming more and more common as the ruling government tries to enforce the idea that to be Indian is to be Hindu. Recently extremist mobbed Christians who were transporting Bibles.

Just delivering Bibles can be seen as trying to convert people to Christianity, and in several Indian states this is against the law.

A video was released in February this year, of the extremists yelling abuse and threatening believers with their lives. Another video depicted them setting alight a pile of Bibles they confiscated and destroyed.

“You Christians get lost. This is the first time we have seen you here hence we are leaving you, next time you won’t have your car…” the extremists said. “Go away or we’ll set your car on fire. We should burn you all, actually, and even the car so that such things do not continue.”

“Take pictures of their faces,” they continued. “Burn the Bibles, rip the papers apart so that they would burn properly, open the Bibles and burn them all.”

With violence incidents increasing in India, which is ranked at number 11 on the 2018 Open Doors World Watch List, many believers remain fearful.

The Evangelical Fellowship of India (EFI) described 2017 as “one of the most traumatic” years in a decade for Indian Christians.”

A report the EFI released noticed that violence between religious groups has increased 28% over the past three years.

Continue to pray for the body of Christ in India. Pray they are strengthened even in the face of persecution. Even in the midst of their suffering, the gospel is spreading throughout the region. 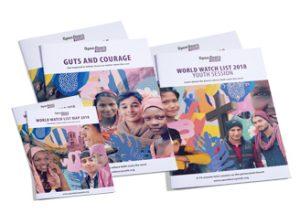 Many, many Christians around the world are living out their walk with Jesus with immense guts and courage despite persecution. Get our free Guts and Courage guide, World Watch Map and youth leader session outline to find out more…