Mike Gore, CEO of Open Doors Australia shares three of the most powerful images from 2017, and the incredible stories behind them. Here’s story one! 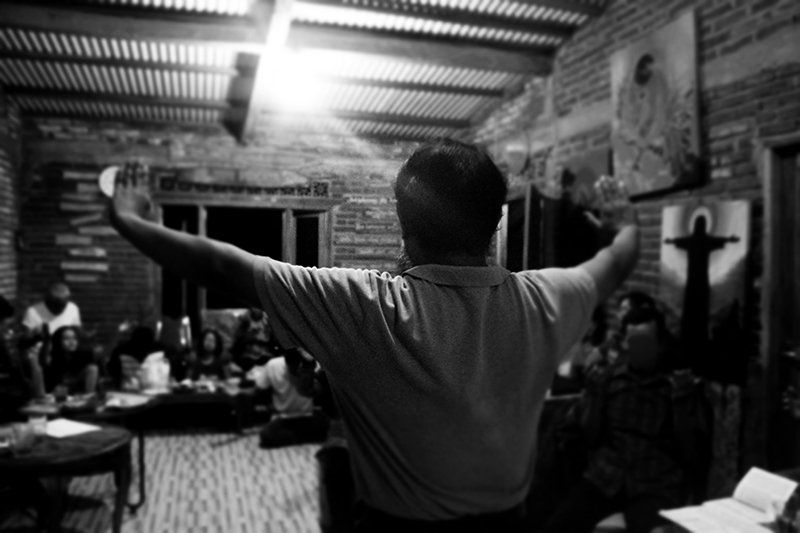 Note: This image is representative…

From the moment I met Joseph one of the things that stood out to me was his warm and inviting personality. Don’t get me wrong he is a tough man and I get the impression that he’s someone you’d never want to get on the wrong side of, but he radiates Godly love.

But this has not always been the case.

In Christian circles we often talk about radical transformation, stories like that of the Damascus road, – and Joseph’s is exactly that.

Joseph and his wife Sally have been married for 26 years.

As we sat eating dinner, Sally told us that for 12 years of their marriage she lived with blue eyes because he was always drunk and beating her. According to Joseph, it was a common practice within Islamic culture.

Sally tells us that many times they were going to divorce but didn’t want the children to grow up without a father so they stuck it out. Their love for each other is so evident and beautiful. They have a wonderful sense of humour and laugh a lot with each other.

Joseph began drinking when he was 10, and not long after dropped out of school and joined the military.

In 1998, Sally’s brother John was sent to jail. A Christian man by the name of Paul would visit John in prison, and also Sally and Joseph at their home.

In those days Joseph was one of the most well-known jewellers in Central Asia. He had loads of money and would often walk home from work drunk throwing wads of money at people.

One day Paul came and visited Joseph at work. Joseph had cigarettes and vodka on his desk. He said to Joseph, “I see that you want to quit drinking but you cannot.”

Joseph said, “That’s true but I cannot because I’ve been drinking so many years.”

Paul replied, “I know one person who can help you. Jesus Christ.”

Joseph thought, “What can He do?”

Paul told Joseph how Jesus had changed his own life and that Jesus could change Joseph ‘s life too. After that, they would meet together every week. Paul would tell Joseph about Jesus, and Joseph would try to disprove him.

In prison, Sally’s brother became a Christian. Not long after, Joseph accepted Jesus too.

But this is the part that undid me. In my thinking, from this moment onwards Joseph should be a changed man, a good man – but that’s not how it worked at all.

Joseph didn’t stop drinking, he didn’t stop beating Sally. He did start evangelizing, especially when he was drunk.

When John was released from prison, he came home and started telling everyone about Jesus, and trying to encourage Joseph to change his ways. But Joseph continued.

One day John came to visit Joseph, they went to church together. Joseph got dressed into his nice clothes – they were also his Islamic clothes.

Everyone was shocked when he walked into church. They thought Joseph had got the mosque confused with the church. He entered the church but didn’t take off his Islamic hat and everyone was whispering between themselves.

John was sitting next to him and Paul went forward to preach, at the end Paul made an alter call.

Joseph told us, “Something happened inside me and I was not able to stay. I stood up and said to John, let me go and I went directly to the pulpit and I could hear people asking what was going on. I am sure people thought I was going to beat the pastor but I fell to my knees and started to repent and pray. The Holy Spirit was doing something supernatural in my heart. Then John ran to me and gave me a hug and fell to his knees. We were all crying and praising the Lord.

“Only later did I realise that for those 4 years John and Paul had been praying for me and that day their prayers had been answered. On that day 28 people one by one accepted Jesus. And that day I promised the Lord I would serve Him faithfully.”

But still for years, Joseph continued to drink.

One day, while he was lying on the couch he heard the audible voice of God.

Joseph said to God, “Because he is my father.”

The Lord replied, “Joseph you’ve been drinking for 21 years of your life. Why during these 21 years have you never dared drink in the presence of your father?

“You’ve been smoking for so long but why never in the presence of your father? I don’t want anything from you except for one thing that our relationship would be the same as you had with your father.”

Joseph rolled down onto the floor and started to cry. “Lord for me, you were so far away from me, you were in the sky in the heaven but since today and this moment you are my Father.”

He told us that since that moment his life had changed – his world has changed. God has provided miracles, restored the relationship with his wife Sally, his children and brothers.

Joseph finished by telling us:

“There are Christians who want their children to live without any problems, without any needs. It always surprises me. I would tell them that we need to teach our children the different things. Moses says, ‘earn to love the Lord your God with all your heart, mind and might and we need to teach our children the same. If we would teach them today how to love God, then God promises, ‘The one who believes in Me will never be ashamed.’”