So Wales have got through to the quarter finals of the Euros!! I had the pleasure to witness Wales’ first tournament game in 58 years when they played Slovakia in Bordeaux. A win for Wales followed, 2-1, with goals from Gareth Bale and Hal Robson-Kanu. Although we lost to England, we finished top of the group with an incredible 3-0 win against Russia! Now we’ve beaten Northern Ireland and in the quarter finals!

Thankfully I was there to watch my country perform so well during qualifying and then take such form into their first tournament in 58 years. Though many would argue Wales are a one man team centred around Gareth Bale (who scores the majority of our goals), I think this is wrong and ignores the contribution from the rest of the team. The win against Russia was a prime example with three different scorers, Aaron Ramsey, Neil Taylor and Gareth Bale.

I know I’m biased but Wales have a great team and work ethic on the pitch. But the team also have a great relationship with the fans. Throughout the qualifying and group stages Wales have adopted a slogan of “Together Stronger” which perfectly summarises the Welsh team, staff and fans.

But this isn’t a slogan that is just about the Welsh football team. Reflecting on the phrase I also thought it relates well to our global church family. As Christians we’re connected, and though we might live thousands of miles away from each other, we are still united through our faith in Jesus. And when we’re together, we are stronger.

In 1 Corinthians 12, Paul makes this point beautifully. He says the church is like a body – made up of many parts. None of us individually makes up the whole thing – in fact, on our own we’d just be relatively insignificant (even if we were as talented as Gareth Bale). But together, we’re more than the sum of our parts – we’re something special. Together, we’re stronger. 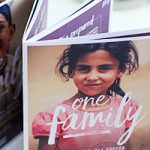 One Family: Together we are stronger

Check out our new ‘One Family’ campaign for some simple ways you can give, speak up and pray for your family around the world. There’s also some quality new, free resources too!

The Author
Mark is a massive footie fan being a big supporter of Arsenal and Wales. He's recently been watching Wales at the Euros and is heading back to France this week to be at the quarter final featuring Wales and Belgium. Along with football, he's also a supporter of Open Doors, and all round top bloke!