Jeovani is from Central African Republic. A few years ago he was in church when a grenade landed at his feet. The grenade exploded. People died, Jeovani survived, but lost both of his legs. But, now, he’s chosen to forgive his attackers, and in doing so his example is changing his community.

Read Ephesians 4: 31-32
‘Get rid of all bitterness, rage and anger, brawling and slander, along with every form of malice. Be kind and compassionate to one another, forgiving each other just as in Christ God forgave you.’

Jeovani’s story is incredibly powerful. Despite losing his legs, he’s forgiven his attackers and is moving on, not letting hate or fear guide his future. In following Jesus’ command to forgive, he has helped change his community too. The challenge from Jeovani’s story is to realise that in living like Jesus, and in forgiving those who hurt us, we can change things. People don’t have to retaliate and escalate anger or violence. There is another way. Can we embrace that?

Father God, thank You for the peace we enjoy in our country and that we can go to church without fear. Help us to remember to pray for Christians who have to live out their faith bravely every day. Holy Spirit, help us follow Jeovani’s example and be people of love and forgiveness. 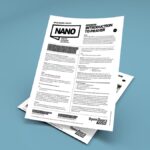 This video and Jeovani’s story are the central feature of our latest NANO youth group session outline. Download it for free for a simple session plan with games, discussion points, Bible material and prayer ideas.