Kim Sang-Hwa* became a Christian as a teenager in North Korea. She grew up knowing just how dangerous following Jesus could be: “We have a saying in North Korea, ‘When three of us are meeting, one of us is a spy and will report to the government.’”

Many North Korean Christians can’t even tell their families about their faith – it’s just too dangerous, and teachers sometimes ask students about their parents activities. You see, if the government finds out that you’re a Christian, it’s likely that you’ll be sent to a labour camp. Most prisoners never leave, and the conditions are worse than we can possibly imagine. Following Jesus takes extraordinary courage in North Korea – it’s been at the top of the World Watch List since 2002. It’s the most dangerous place in the world to be a Christian.

When she was 12, Sang-Hwa found her parents’ secret Bible. “I threw the book across the room. I had shivers throughout my body. And I was so very afraid. I thought: ‘Wow, we’re all dead now.’”

She didn’t know what to do – tell the police, her teachers or confront her mum and dad. She put the Bible back to buy some time to think.

After two anxious weeks, she made the brave decision to ask her father about his faith. And he shared the truth of God’s Word with her.

As her father talked about the Bible, Kim Sang-Hwa felt the Holy Spirit come over her. Eventually Sang-Hwa made the decision to follow Jesus. She knew how dangerous it was, but she also knew it was the best choice to make, once she was convicted of the truth of the gospel.

The underground church in North Korea

More and more North Koreans are making the same courageous decision that Kim Sang-Hwa made. Despite living in a police state and the enormous dangers of being a believer, there is a massive underground church and it is growing. Open Doors estimates that there are 200,000 to 400,000 secret Christians in the country. Tens of thousands of believers are in concentration camps.

Pray for faith, resilience and courage for Christians in North Korea facing unimaginably harsh conditions, and pray for the continuing growth of the secret church. Please pray for Christians in all the countries on the World Watch List, particularly those in the top ten, where following Christ comes with enormous cost. 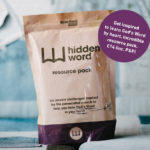 Hidden Word: Learn to value the Bible like Kim Sang-Hwa…

Our innovative resource to help you get inspired by persecuted Christians and learn God’s Word by heart! A series of six weekly devotionals, along with leader guide, challenges and a bunch of awesome memorisation aids!