Tun* belongs to a minority tribe in Southeast Asia, called the Chin. In his country, the law states that citizens must be Buddhist, and many Buddhist groups pressure religious and cultural minorities to leave the country to keep it ‘pure’. Tun faces harassment because of both his faith and his tribe. Despite this, Tun is passionate about his role as a pastor.

“The best thing is to see the lives of people being transformed and being dedicated to Christ and winning souls,” Tun shares. “This gives me pure joy in my life.”

Image: Tun* pointing out his sugarcane and livestock farm

In 2008, Tun’s area was struck by a plague of rats that devastated crops and food supplies. In the midst of starvation and hopelessness, Tun attended an event run by local partners of Open Doors.

“What I learned about Jesus really touched my heart and changed the way I think,” Tun explained. “Before the training I was a nominal Christian. Through it, I learned more about the life of Jesus and what I thought of Him changed. I became closer in my relationship with the Lord.”

In the years that have passed since Tun attended the training, the Lord has used him in miraculous ways. Tun has passed on the same training he received to over one thousand believers, strengthening their spiritual walk and deepening their faith in Christ.

He has also provided livelihood training to 100 believers, showing them how to survive and rebuild following the rat plague. This has provided a stable income and food source for a multitude of families and communities.

Tun travels for two or three days to reach believers awaiting training. Often the journey is uncomfortable and taxing. It can include a 10-12 hour boat trip, riding a motorcycle or squeezing his legs between two iron rods on the side of a truck. On some occasions the journey causes great physical pain that takes days to heal.

He is also aware that because of this work, persecution against him and his family could intensify.

“I tell them: ‘In case I am put in prison, or if I get killed, don’t be surprised, you still press on and still hold your faith. The Lord will do His part, we will do our part.’”

Tun explains his motivation for continuing to teach, despite the hardships.

Image: Tun* leading Bible study and fellowship at his house.

“Whenever I teach, one thing comes into my mind – I remember the story of the Ethiopian eunuch and Phillip… I just point my students to the right direction, and they go in the right way, study their Bible by themselves and pray and cultivate themselves. It brings joy and happiness to my heart, seeing all these things.” 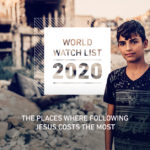 See the places where following Jesus costs the most…

The Open Doors 2020 World Watch List has just been launched. Have a look at our interactive map to see the places where Christians face the worst persecution.