In northern Cameroon, West Africa, Christians face a host of challenges – it’s a Muslim dominated region and over the past few years, Christians have come under increasing attack from the Islamic extremist group, Boko Haram. Open Doors partners work in this area supporting Christians, especially those from Muslim backgrounds, in different ways. Read about Zeinab and Moussa, who both left Islam for Christianity as teenagers – both have bravely stuck with Jesus, despite intimidation, threats and violence.

Zeinab: My father forbade me from going to church

Zeinab is from a muslim family, but she became a Christian as a teenager years. When she was 10, she was sent to live with an uncle. He didn’t take much notice of her – and on Sundays, Zeinab was often alone – so she followed her Christian friends to church.

When she was 13, was sent back to live with her parents:

“My father forbade me from going to church.” But after a while Zeinab found ways to still go. “On Sundays, when mama and papa went to the farm, I would stay back to do house chores and afterwards I would go to church. Whenever papa returned and discovered that I had been to church, he would scold me.”

Despite the pressure, Zeinab kept going and at the age of 16 she was baptised. At this point, her father thought the best way to ‘save’ her was to marry her off to a Muslim. Zeinab refused. In anger, he threw her out. She went to live with her mum, who had separated from her father.

Since then Zeinab’s father has died. It breaks her heart that he passed away before they could make peace. And now it is her Muslim brothers who put pressure on her to get married to a Muslim. Her brothers refuse to support her in any way unless she drops her faith in Jesus.

Zeinab now lives with a sister who is married to a Christian. With support from this family and a church leader, Zeinab enrolled in school and passed her first year. She’s now training as a tailor in a project supported by Open Doors. She hopes to learn how to sew and in time, start a workshop of her own and be able to care for herself. Her daily prayer is that God would reconcile her with the rest of her family and enable her to complete her studies one day.

Like Zeinab, Moussa is from a Muslim family. In fact he is from the Kanuri tribe, a predominantly Muslim group many of whom have helped fill the ranks of the Islamic extremist group, Boko Haram.

Moussa: Beaten for having a Bible… 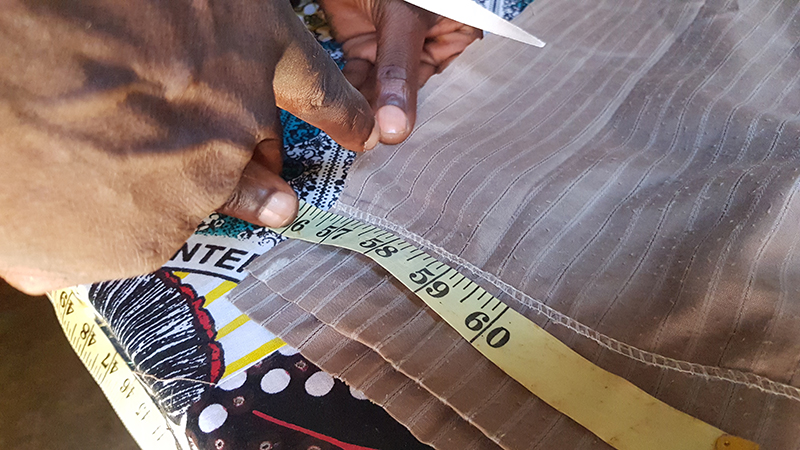 When he was a teenager, he had a bad dream that stuck with him. Not long after that he met a pastor, who gave him a Bible. One night, Moussa woke to his mother beating him with a stick. She had discovered the Bible among his things.

Hi Mum was pretty angry. She said “If I ever catch you with this book again, no one knows what I will do to you”. Moussa explains – “My brothers hated me. Being Kanuri, I couldn’t tell you what would have befallen me had I stayed.”

Moussa was a teenager – and he wasn’t even a Christian – he’d just been found with a Bible. But, still, he felt he had to leave for his own safety. So he fled, and had the chance to read the Bible. He met with the pastor who had give him the Bible and they worked through passages together – and the pastor explained what Moussa’s dream could be about. After that, Moussa became a Christian.

But things haven’t been easy: “I was about to get married but now, after confessing Christ, I wonder who would ever give their daughter to me in marriage. It seems impossible to me! I am now all alone. I am not welcome at home. Even a stranger is better off than me, because they at least would be regarded a stranger that needs welcoming. As for me, they don’t even see me. I am nothing in their eyes.”

Like Zeinab, Moussa is taking part in a project run by Open Doors partners to give him training and skills to find work… but it’s not easy for him – he often has to trek for hours to get to the workshop. Despite it all, Moussa is committed to making the most of his opportunity and something of himself in the future.

“Please pray that I find peace, especially inner peace. Also pray for my family, that they also may find this right Way.”

Want to learn more about, and get inspired by, the brave faith of Christians living in some of the places most opposed to following Jesus? Get our awesome 2020 World Watch List prayer map and stickers – it’s free. Plus we have an awesome session outline for youth leaders which includes a massive A1 map too. Get them for free at the link below: