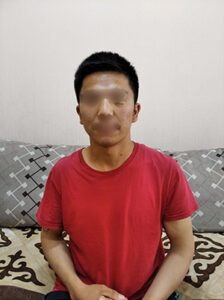 Our partners in Central Asia recently made contact with Amiel* a young man who had made the risky decision to choose Jesus. The message he sent us shows the reality of choosing to follow Jesus in this country when your family have different beliefs.

“My name is Amiel, I’m 22 years old, I live with my parents somewhere in Central Asia. My parents are Muslim, and try to be religious, praying five times per day. Their desire was that I became a Muslim and follow them in their footsteps. But I was not like them. In 2016, a classmate of mine invited me to a church where  I accepted Christ as Lord and Savior. I didn’t know how I could tell my parents that I had become a Christian…. they often told me about Islam, advising me to attend the mosque and regular prayer.

“One day I was chatting with my friends and my parents saw a Christian video that we were watching. So, I shared with them that I’d become a Christian. When my parents heard this, they were just in shock, and began to scold me. After a while they took my official documents, so that I would be completely under their control.

“My uncle started to threaten to attack and kill me. One day, when I was home, he was in the field mowing the grass – he found out that I was home and he came and had a whip in his hand. He began to hit me on the head. And when he finished, he tried to pull me to the barn, where, as he said, he wanted to kill me.

“My parents just stood by, as if supporting my uncle. And my uncle, scolding me, said: it would be better if you became a murderer than a Christian. He tried to persuade me by calling Christians liars. I silently endured all this, knowing that if I started saying something, I would just be killed. The only courage I had later, was to share the Gospel with my sister, she is seventeen years old.

“Later I decided to get up early in the morning, and to leave my home. I’m try to get a new passport and to leave this country and serve God in another place.”

2. Take on the Choose to Lose Challenge and get sponsored to give up something you love for a short time to raise money and prayer for those, like Amiel, who have lost much because of their faith in Jesus. Sign up to get a free pack.