Despite persecution, first from her family and then from her community, Sarah from East Africa is standing firm in her faith and courageously sharing the gospel with others. This is her story – and your role in it.

The headaches Sarah* was suffering from were debilitating, but nothing worked. Tribal medicines, incantations, animal offerings or imams chanting Islamic scriptures over her, the only impact was exhaustion and expenditure.

Sarah is from East Africa and grew up in a staunchly Muslim household. But while she studied the Quran, attended mosque and followed the customs required of her, Sarah’s commitment was only ever nominal. “I was just following what my peers expected of me,” she confesses. The failed attempts to heal her only entrenched this.

But healing did come – as did persecution.

It began when Sarah was invited to church to do some childminding during a service. She was prayed for and, although she initially felt sceptical about the whole experience, a seed of curiosity had been planted. “I went home and continued using the medicines,” she recalls. “But they were harming me, so I thought, maybe it would be better to receive Christ. Muslims do not know that Christ is God, but I started questioning that.”

The questioning eventually led to a life-changing decision, as she gave her life to Jesus. “And since I believed Christ, I have been healed,” she says.

But her choice caused uproar among her family. They rejected her and withdrew financial support, meaning Sarah had to drop out of school.

Thankfully, Open Doors local partners were able to enrol her in a Bible study group as well as trauma healing and persecution survival seminars. The support has helped her to stand strong in her faith and courageously share the gospel with her family – and many of them have since given their lives to Jesus! 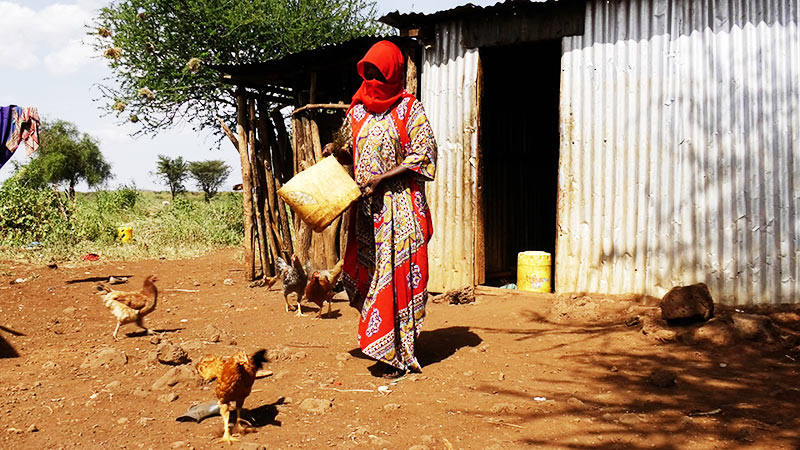 But the persecution continued, this time from Sarah’s local community. “Our Muslim neighbours started hating us,” she says. “They would throw stones on our house when we sang. No one would talk to us. When we went to church, they would come and damage our mango tree. They would tear our clothes and talk badly about us.”

What hurts Sarah most is the impact this has on her family. “Nowadays I do not feel anything about my own hardships,” she says. “I do not care, because I have been healed. But when they talk ill about my family, I feel bad.”

The opposition faced by Sarah has made other girls her age afraid of engaging with conversations about Jesus. “A person like me, a girl my age, cannot easily convert to Christianity,” she says.

But she has started a house church that is growing – so much so that they’ve had to move to a larger home! “We are in a small church made up of a few families,” Sarah continues. “Sometimes we can invite someone to come and teach us. The Muslims around complain about us. But the same people who would talk about us would call us again to pray for their sick children.”

“You gave us everything”

“You gave us counsel, you prayed for us, you were close to us, you gave us advice, you gave us everything,” Sarah says of the help provided by Open Doors supporters like you. “Initially we would be silent about our stress and not talk about it, but now we share about it. We have learned how to deal with what we are facing. I received assistance from the training which I have passed to my group, and it has helped them.”

“I ask you to remember us in prayer. That is the most important thing. We pray that God strengthens us. I pray that God will give us peace in our region that we can move to teach the gospel to others.”