This summer at events like Soul Survivor, we’ll be talking about the increasing violence facing many Christians in Egypt. A recent attack on Christians in a village in Minya highlights why we need to pray and act. After the latest violence, the local Coptic Christian community have been afraid to leave their houses and security forces are patrolling the streets.

The attack took place on Monday (9th July) after 35-year-old Abdo Adel, a Christian, posted on Facebook comparing Islam’s prophet, Muhammad, with Jesus. We don’t know the contents of the post, but it has been taken as offensive by many. At the very least it was unwise to post something like that in such a volatile climate. But what happened next shows the level of hatred and anger against the Christian community.

Muslim villagers filed a complaint with police and Abdo Adel was arrested on charges of insulting Muhammad and contempt of Islam. He has been remanded in custody for 15 days, pending further investigation.

Then, a group of young Muslim men tried to attack Abdo Adel’s house but were dispersed by police stationed outside. Three days later a mob attacked Christians and their properties in the village.

“The Muslim extremists in our village and the nearby villages incited the Muslim villagers against us,” said a local resident, Girgis Shawky. “They began pelting the Coptic-owned houses with stones and bricks while shouting ‘Allahu akbar’ and chanting slogans against Copts.”

Windows were smashed and some Christians sustained minor injuries. The attackers also attempted to break into St. Tadros Church and the house of its priest, Father Antoun.

It wasn’t until regional security forces arrived in the village that order was restored. A curfew was imposed and Christian homes were cordoned off. Police arrested 90 Muslim villagers on charges of mobbing, attacking Coptic houses and the police, and inciting sectarian strife.

There is a state of panic and fear…

“We lived very terrible moments while the mob were attacking our homes. Our children were screaming,” said Hany Adly, who owns an electrical-supplies shop in the village. “All of us have stayed in our homes. We are afraid to get out to the village streets. There is a state of panic and fear among all of us here. I cannot open my shop. Despite the presence of security forces in the village, we are still receiving threats from our Muslim neighbours. They say they will take revenge on all of us as soon as the security forces leave the village. We are afraid that they will attack us this Friday after their noon prayers.”

Father Antoun said, “We strongly denounce what was published on the Facebook page of this man, which is understood as an abuse to our Muslim brothers. However we do not accept this abuse. May God protect our country from evil.” 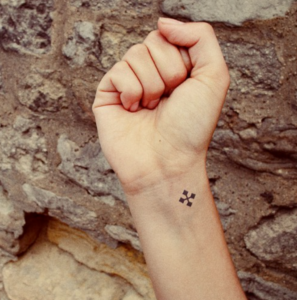 This summer at Soul Survivor we’re going to be asking thousands of you to stand with Egyptian Christians and your persecuted family by wearing a temporary cross tattoo on your hand and wrist. The cross tattoo looks just like those many Coptic Christians get when they are young. Look out for our (fake) tattoo parlour in the ToolShed at Soul Survivor weeks A, B & C. Come along to get inked with a cross tattoo, like many Egyptian Christians, and stand with those who know the real cost of following Jesus.

Egypt is number 17 on the Open Doors World Watch List. A rise in violent and deadly attacks caused the deaths of 128 Christians last year and left many injured. So-called Islamic State targets Christians and the government’s low regard for fundamental rights means there is little protection. Muslim-background believers face enormous pressure to recant; official recognition of conversion to Christianity is almost impossible because you cannot change your identity card from Muslim to Christian. It is, however, possible to change identity cards from Christian to Muslim. Building places of worship is difficult because of administrative restrictions, communal hostility and violence. Church leaders are monitored by the state. Believers, especially women, face discrimination and abuse at work.