Pastor Adane* has served a church the east of Ethiopia – a largely Muslim area – for over 20 years. Most of the church come from a Muslim background and the congregation faces constant pressure. The coronavirus pandemic has only increased the challenges they face.

The local community doesn’t want the Christians in their area – shops have been asked to not sell anything to Christians, whilst recently, believers have been stopped from holding funerals and burying loved ones.

Despite these challenges, Adane’s ministry has been fritful, and the church has even grown to support evangelists and pastors in the surrounding areas. Even though he keeps a low profile, the wider community have noticed he’s involved with those who have left Islam. That means he’s become a target.

He’s been assaulted outside his home, has received threatening phone calls and he’s been badly beaten. His son was even targeted by other children at school – they were the children of the people who had beaten him up. Adane’s hearing was affected by the attack and Open Doors helped to cover the medical expenses for his treatment and to pay for a hearing aid. 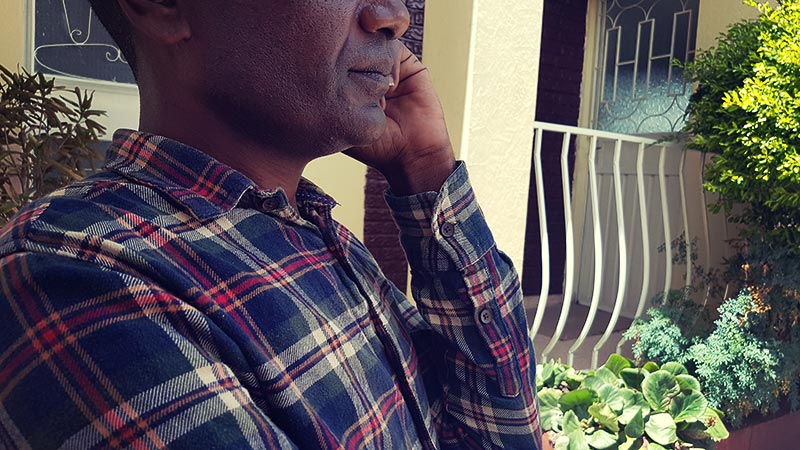 Image: Adane on his phone…

The Cover-19 pandemic has only increased the pressures Adane is facing.

“Because of Covid-19, the church is in great trouble. While churches were closed (as part of government lockdown), nobody could come to church… we had no income to pay the pastors and evangelists. Before, there were people who helped support ministry workers, but now they have stopped. The church used to have many streams of income… it has all stopped.”

As income was dropping, local Muslims opposed to Adane’s ministry encouraged his landlord to evict him with only 3 days’ notice. When Adane tried to rent a new place, the new landlords were also threatened. Eventually he felt forced to rent a place in another town.

Despite registering for help, Christians have also been deliberately left out of government aid, says Adane. “There were different kinds of support in our area from the government. They gave oil, rice, and dough to some people. When people register, they exclude the Protestant community. Especially if they are believers from a Muslim background… we have not seen them give to Protestants. We asked our church members, both in the rural and urban areas, but they have not received any of the support given by the government.”

The local government often excludes believers because they believe the Christians receive support from outside Ethiopia. For instance, Girma*, who is the father of 3. “Girma does not have a farm… He has nothing. At first, they registered him for support, but removed his name from the list because they found out that he had become a Christian. … He is in great trouble and the church has nothing to give him.”

Despite feeling overwhelmed by these challenges, Adane chooses to hold on to God’s Word. “In September last year, God gave me two Scriptures to meditate on. First, Revelations 3:8 that says, ‘I have placed before you an open door that no one can shut.’ And Psalm 91:1, ‘Whoever dwells in the shelter of the Most High will rest in the shadow of the Almighty.’

“God’s Words are inside my heart. When I pass through all these troubles, they encourage me. I tell myself that God is the One who gives purpose and I will not go anywhere else, because He has a plan for my life. In whatever situation, He has a solution and He is my protection.”

Open Doors is in the process of delivering relief aid to 1,500 Christian families in urgent need of help across sub-Saharan Africa and thousands more in other places affected by the pandemic.

1. Email your MP. Ensure that the UK Government implements mechanisms that protect persecuted Christians on the frontline by emailing your MP using this simple form. It’ll only take a minute and will automatically find your MP and email them for you. Do it to ask those in power to speak up on behalf of vulnerable Christians around the world who are last in line.

2. Give or raise money to help. You can give now or sign up to do an awesome fundraising challenge to help get vital aid to Christians who are last in line. Every £14 could mean a Rapid Response team can courageously bring emergency aid to a persecuted believer. 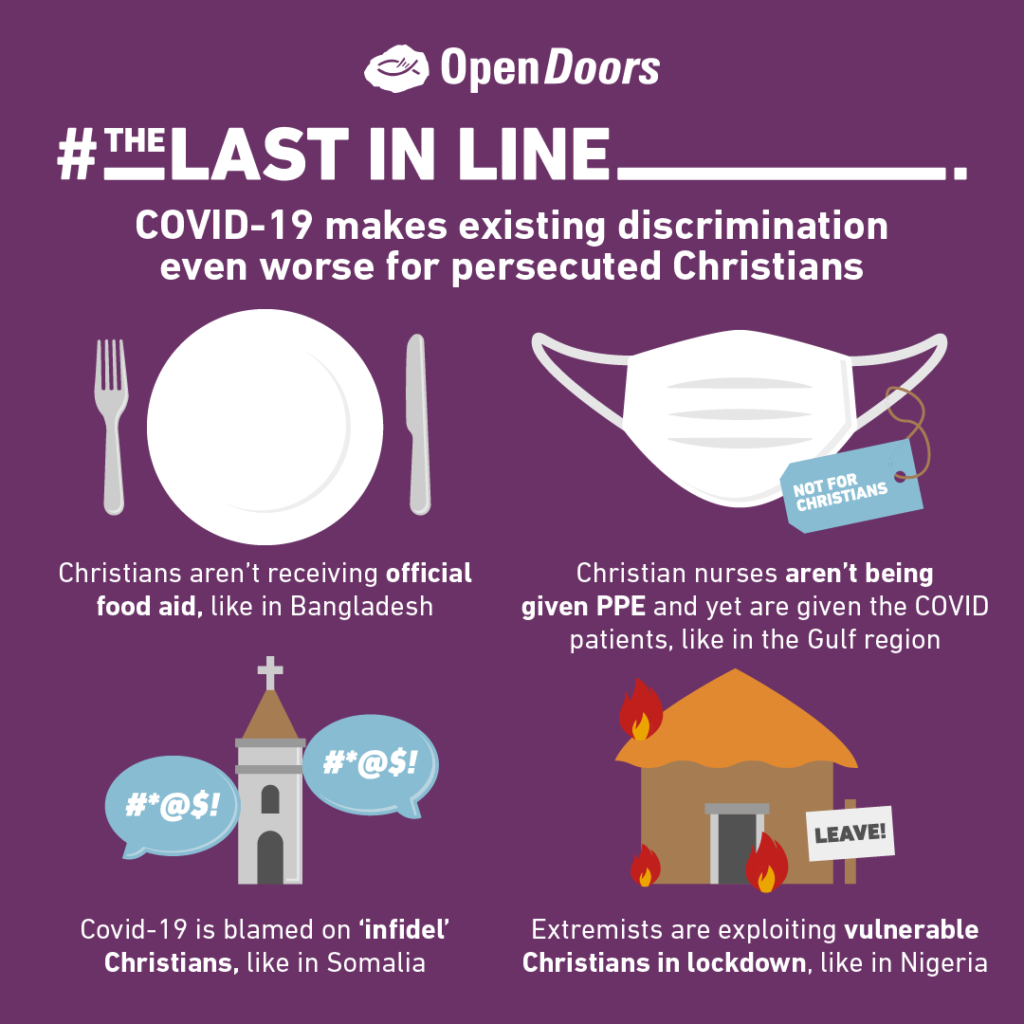 3. Share what is happening. Post this infographic on your social feeds and share with friends and followers that in many places around he world, Christians are last in line. Use the #thelastinline and tag us (@opendoorsyouth).

4. Share an image of a cross and an empty plate on social media (like the one below). Take a photo of you holding an empty plate and wearing a cross to highlight that Christians are last in line (you don’t have to add text to the image). Your images (if public) will be shared with the UK Government to show the scale of support for our persecuted photo. Share your photo, tagging @OpenDoorsyouth, your MP and #TheLastInLine 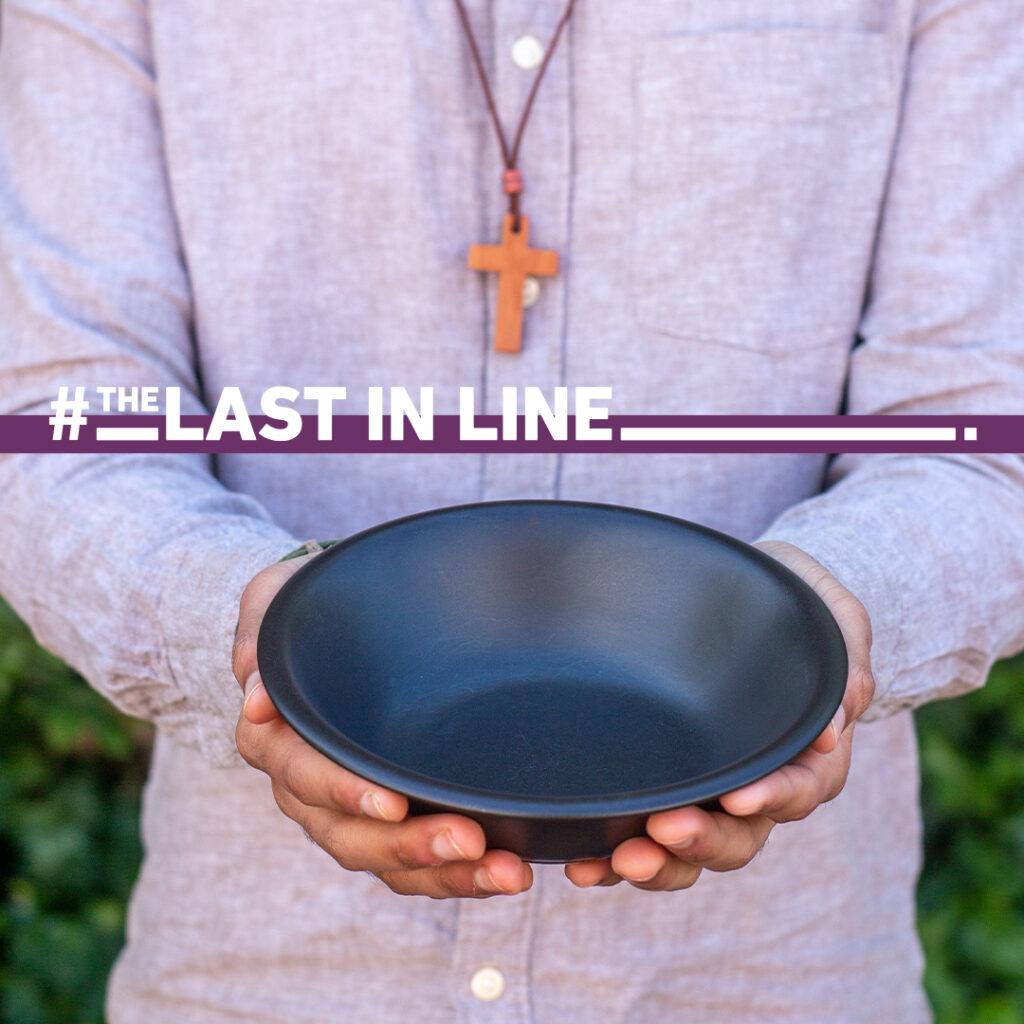