Sadly, in many places around the world, different religious groups don’t get on well together. Open Doors exists because Christians are targeted, singled out and discriminated against in many countries. But it’s harder to hate, when you grow up knowing and being friends with people from different backgrounds.

One church-run school in Ethiopia is helping to heal wounds and religious tensions between Christians and Muslims by creating a platform for interaction and engagement for children from both religious backgrounds.

‘We paid a huge price for our faith’

Not so long ago, Christians in this community (a rural town, where roughly 99 per cent of the population are Muslims) faced constant, brutal persecution for their faith in Christ.

“Previously, persecution was common,” says Feyissa*, the pastor and founder of the church school. “Muslims didn’t even want us to step on their land. We Christians were only a few, and we were scared to move around town. We never went out at night. It was miserable. In those days at least one church member per day got attacked. They used to call us ‘kafir’ – infidels – all the time! I got attacked many times when I went out to minister. One time it was so bad, I needed medical care.”

The school principal, Desu*, elaborates: “Every day, Muslims would throw rocks at the church. Whenever members walked to church, Muslims would grab their Bibles and set fire to them. They even used to push our children around as they made their way to church. Christians were refused a place to bury their dead. We were also violently chased from social gatherings. It was dreadful. We paid a huge price for our faith in those days.”

‘God was very near us’

“Open Doors training helped us very much to grow spiritually in these troubles,” Feyissa continues. “We learnt that persecution can move believers from strength to strength. When people pass through persecution, they become strong. God was very near us in those days. We had nothing else that strengthened us. God himself strengthened us by the power of the Holy Spirit.” 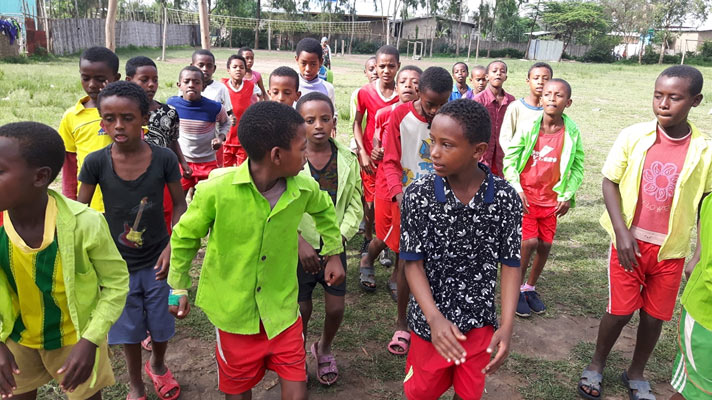 ‘Through this school we have become connected’

Feyissa wanted to find a way to bring about change in the Christians’ relationship with the local community. He had a brainwave. “I asked Open Doors to support the school I had started for seven kindergarten students in our church compound. You agreed, and the numbers grew quickly. Later, they helped us to expand. We found land and built a primary school on a separate compound. Most recently, some kindergarten classes were added to that site.”

This place has acted as a bridge right into the hearts of the once hostile Muslim community.

“Despite knowing full well that this is a Christian establishment, local Muslims have been sending their children to our school. Today half of our around 800 students are Muslims. As more and more Muslims enrolled into the school, we frequently found opportunity to meet with the parents and develop better relationships with them. Now, we even counsel parents when they have family issues, and we have the opportunity to share the gospel with them,” Feyissa explains.

The persecution has not disappeared altogether, but now Christians often see Muslims come to their defence.

“We used to be distanced and disconnected from the Muslims, but through this school we have become connected. Now we are even invited into their homes. Where there used to be only hatred, there is now respect. They say: ‘Hustaz (teacher), please come in.’ This gives us a sense of overwhelming joy.”

‘I want to show that I’m a Christian’

Twelve-year-old Sisay, a Christian student at the school, has written ‘Jesus is coming soon!’ in pen on the back of his shirt. He says, “I want to show that I am a Christian.” Amazingly, he feels very safe to live out his faith in the school. “I pray when I eat and the Muslim students say nothing about it. I am so glad about my school. I am happy about the teachers and the friends I have.”

The school is a place where Sisay may start to realise his dreams. “One day, I want to be a doctor, because I want to serve my community. And in church, I want to become a singer like the other brothers in our village,” he says.