India: Forgiving those who burnt down your church

Rohan* grew up in a Christian family in India, and was always aware of the dangers that being a follower of Jesus could bring. But when he planted a church he never expected it would be burned to the ground by those who don’t want Jesus in India.

When Rohan was 18, God spoke to him through the words of Isaiah 43:1 – “Do not fear, for I have redeemed you; I have summoned you by name; you are mine.”

“God put a thirst in me, through His Word. On that day, I dedicated my life for ministry. I decided to go wherever He leads me to do His work.”

Some years later, Rohan started a church. It began with a children’s ministry and personal evangelism until, in 2008, there were enough believers in the area to form a congregation.

“It was the first church to be established among the non-believers,” says Rohan. “It slowly started to grow. Initially there was no problem, but we faced opposition in 2012. People wanted it to stop.

“We knew there would be opposition – an anti-Christian group were only three kilometres away. Hindu extremists used to stop meetings, and say that Christ is a foreign God who doesn’t belong in India.”

But Rohan wasn’t prepared for what happened in 2018.

“We’d held a prayer meeting… At midnight, my neighbours called to tell me that the church was on fire. As I heard the news, a kind of chill ran through my body.

“The church was only ten minutes away – but by the time we got there, everything was burnt to ashes.”

The church had been deliberately burned down. Everything was destroyed. Even in that moment, Rohan had faith in God. He refused to stop holding services. Since they no longer had a building, the congregation erected a tent and used that for worship.

“I never thought about giving up. I trusted that God would act. I wanted to see Him take me a step further in ministry. 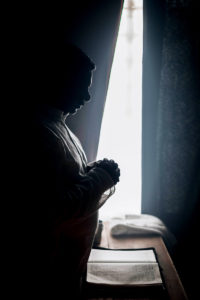 Rohan contacted Open Doors partners in the area and, thanks to your support and prayers, they were able to help with encouragement and financial assistance.

“The Open Doors partners visited, prayed with us and encouraged our congregation. They told us that God would do great things. And the financial help they gave us later meant that we could start rebuilding.

Rohan has seen his church grow. Since the building was rebuilt, the congregation has doubled in size to 60 families. Praise God! Thanks to your support, they can now continue to be the light of Christ in their community. Rohan is already keen to plant other churches in the area.

“I have forgiven them…”

By the grace of God, Rohan is even able to forgive the people who burned down his church.

“And we are praying for their salvation. We are continually praying for saving grace. It is my vision and desire that everybody should know Christ.”

Rohan’s courageous faith and humble forgiveness are inspiring. He knows that the church in India has a long way to go, but believes that God will provide. He knows how much Jesus loves the Indian people.

Sign up to go screen free and get sponsored to shut down your devices for anything from 6 to 48 hours. Raise money, prayer and awareness for courageous Christians like Rohan who are sticking with Jesus despite attempts to silence their amazing faith. Sign up and get a free pack!