India: ‘It was Christ who healed me’ 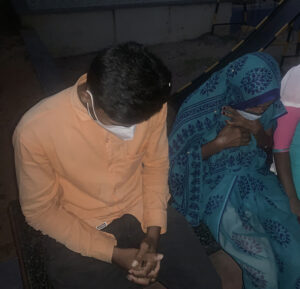 Like many believers in India, Shanti came to know Jesus when she was healed of an illness. Her whole family also chose to follow Him – but their local community and close relatives were not happy. Sadly, Shanti no longer has contact with her extended family after they cut her off.

“It was Christ who healed me on whom I haven’t spent any money – all He wanted was my heart.”

The family then moved to another town – but persecution followed them. One day, when they were returning from a prayer meeting, they were ambushed by Hindu extremists. Angry with them for leaving Hinduism and converting to Christianity, the extremists beat them badly. Sanjiv, Shanti’s son, sustained a broken nose.

The situation went from bad to worse when the same extremists who attacked them lodged a complaint with the police against Shanti and her family, stating that they were forcibly converting people in their village. The police arrested them and put them in prison, where the officers refused to listen to their side of the story, and shockingly even beat them further.

Incredibly, Shanti continued to stand firm in her faith. “I have experienced the love and peace of Christ in my life,” she says. “I have been to temples and other worship places, spending money to get healed. But it was Christ who healed me on whom I haven’t spent any money – all He wanted was my heart. My family and I can never leave Christ for the mere pressures of humans.”

What is it like to be a Christian in India?

Not content with the harm they had already caused to Shanti and her family, the extremists continued to spread their anger throughout their community. Eventually, Shanti, Sanjiv and the family took shelter with another Christian in a neighbouring village.

“Thank you for all your assurance and prayers”

Thanks to your prayers and support, Open Doors local partners helped Shanti and her family with medical assistance for Sanjiv, who had to have surgery on his broken nose. They also provided the family with groceries.

Shanti says, “I am so grateful to God for the organisation, who stood by us in this difficult time. God indeed places encouragers during tough times to build up our faith. I also thank you all for your assurance and prayers.

“God indeed places encouragers during tough times to build up our faith.”

“The Bible warns us we will face persecution, so we are prepared for any situation. Worse may happen to us, yet at the same time we are reminded of the verse from 1 Peter 2:4 which says, ‘As you come to him, the living Stone — rejected by humans but chosen by God and precious to him.’ This verse strengthens us and encourages us.”

Shanti’s enduring faith is inspiring. Please pray for her and her family, that they will continue to follow Jesus despite the persecution, and that their witness would soften the hearts of their persecutors.

Three things you can do now…

1. Act now: Stand for truth by emailing Nigel Adams, Minister for Asia, asking him to do something about persecution of Christians and other religious minorities in India. You can do that below, it will only take a few minutes.

2. Walk with Them: Organise a sponsored walk. Choose your route and distance and start raising money and prayer for Christians facing intense persecution in India. Sign up and download our Walk Guide with stories, prayers and actions to take as you walk!

3. NANO – Truth or Lies: We’ve written a special NANO session outline that leaders can use with youth and small groups to help them understand some of the lies that are being told about Christians in India. Includes a video story, Bible reflection and activities.