In her first year of high school, seven years before she became a Christian, Tari* heard a song that reminded her of something. “Not with gold and silver, You redeemed me with Your love and sacrifice,” the song “As You Want” declares. “The song sounded so familiar to me. Then I remember when I was a small kid, this song was performed during a TV show.” She felt so peaceful listening to this song.

Being Muslim, she was intrigued by the lyrics and music and so she listened to more Christian songs and became more and more curious about the feelings and emotions she experienced each time she heard one. She began looking for more worship songs online and starting searching for the prophet Isa al-Masih (the name for Jesus in the Koran).

She was trying to be a faithful muslims, and then one night, she had a dream. She found herself on a very lengthy, almost endless road. She did not understand the meaning of the dream. But a few weeks later, the dream came back. This time, that long road ended in a dazzling light, and she distinctly heard the words “I am the way, the truth, and the life.”

She had no idea what that meant. “I couldn’t get those words out of my head. Finally, I tried searching for it on Google and discovered that it alludes to John 14:6 in the Bible. I came to the realization that Isa Al-Masih (Jesus) is the way and the truth and the life. Look, I get goosebumps as I remember that moment”, she said, pointing to her arm.

Moving away from home 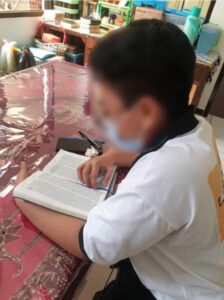 A while later, Tari went to live with her uncle who was a Christian, and he started taking her to church. And after a long time, she made the decision to follow Jesus.

“I was so happy that I finally became a believer,” Tari exclaimed, “I was overjoyed; I purchased a cross necklace.” She also made the decision to get baptised.

Soon after her baptism, Tari made the decision to go back home. She didn’t intend to tell anyone of her newfound faith, but after one of her friends saw her cross necklace, she couldn’t hide her secret: “Wow! You’re an infidel now?” they said, “Why do you wear a cross necklace?”

Before Tari could explain herself, “They pulled the necklace off my neck and threw it away. I was in pain, but I was not mad at them. I wanted to show them the love of Jesus.” Praise God! One of Tari’s friends from her home town is now a Christian, and Tari doesn’t feel so alone anymore.

At that time, Tari hadn’t told her parents of her decision to follow Jesus. She hid her baptism certificate in her wardrobe, and behaved as she had before, hoping no one would notice any changes.

And then, the thing she feared the most happened. While she was out of town, her mother found her baptism certificate. She called Tari immediately and yelled at her over the phone.

Her mother was hysterical, she could not accept that Tari had become a Christian. Tari was scared and sad – she felt that she had disappointed her mother. Thinking that she was not ready for what she would face back at home, Tari decided to stay with an older Christian friend in another town.

Open Doors local partners in Indonesia are keeping in contact with Tari and supporting her through prayer and encouragement. Tari hopes to one day face her mother and her family again, but she’s not ready to do that yet. Please pray for her as she works out what to do and how to live out her faith in a place where doing so can bring hostility.