Thank you for your continued prayers for Mary Mohammadi, a 21-year-old Christian activist in Iran. She has been sentenced to three months plus one day in prison and 10 lashes in response to her alleged participation in a demonstration against the shooting down of a Ukrainian airplane this January.

According to Article18, Mary says: “There was no evidence against me, so I ought to have been acquitted, but instead I was sentenced not only to imprisonment, but also flogging.

“And it should be mentioned that even before the verdict was handed down, I and my family were forced to endure all kinds of torture, none of which was sanctioned by law, and which ought to be considered crimes in themselves. So even if I would have been acquitted, it wouldn’t have been a real acquittal!”

Mary has decided not to appeal the verdict because she says ‘the appeal courts have turned into affirmative tribunals’.

Her sentence is suspended for one year, and is dependent on her conduct.

Please continue to keep Mary and her family in your prayers.

Thank you so much for praying for Mary in Iran. If you haven’t heard her story, she’s been subject to continued pressure for speaking up about how Christians are being treated in Iran. She converted to Christianity as a teenager and knows all about the cost of choosing Jesus – when she was 19 she spent six months in prison for her membership of a Tehran “house-church”. 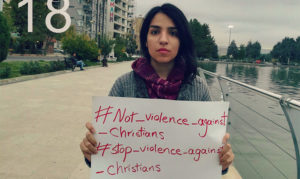 Last year she faced charges related to her “improper” wearing of hijab. The charges, which were eventually quashed, were brought against her after she initially went to police to complain of an assault.

At Christmas, she was unable to take her university exams because her student card hadn’t been issued.

Then, in January she was arrested again for taking part in a protest about the Iranian government shooting down a passenger plane.

According to Middle East Concern, Mary was treated badly after being arrested, even being denied food during the first 24 hours. At the detention centre in Vozara where she was initially taken, she was ‘forced to sit on the ground in the yard in front of the toilets’.

Mary was later transferred to Evin Prison, Tehran, and charged with ‘disrupting public order by participating in an illegal gathering’.

Thankfully, she has now been released on bail, with a court hearing originally scheduled for Monday 2 March, but this has been postponed.

Believers in Iran ask for continued prayers for Mary, that she would recover from the emotional and physical distress of being imprisoned, and that her court hearing would be conducted fairly and impartially.

Father God, thank you for Mary and her brave faith. I pray you’d help her continue to speak up for truth and justice. Protect her, help her know your love and presence and give her strength. Use her to bring many others to you. Use her to help change the way the Iranian government represses minority groups like Christians. I pray she’d have a fair trial and would be able to go free. Be with all those in prison in Iran for speaking up for you. Give them courage and perseverance. Bless them and let them know you are with them. Amen.

Want to learn more about, and get inspired by, the brave faith of Christians living in some of the places most opposed to following Jesus? Get our awesome new 2020 World Watch List prayer map and stickers – it’s free. Plus we have a new session outline for youth leaders which includes a massive A1 map too. Get them for free at the link below: