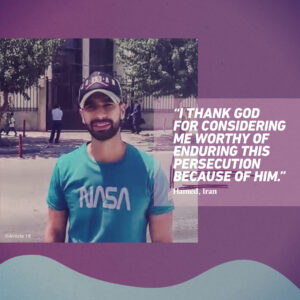 An Iranian Christian convert has begun a ten-month prison sentence for ‘propaganda against the Islamic republic’.

Hamed Ashouri, age 31, was arrested in February 2019 whilst leaving his home in Fardis, which is located west of the capital Tehran. Agents raided his home and confiscated all Christian items, including Bibles and other literature, as well as computer hard drives. Hamed’s initial stint in prison included ten days in solitary confinement.

Refusal to inform on Christians and attend ‘re-education’ classes

During interrogations, Hamed was offered a financial reward to inform on other Christians. He refused and was beaten. After being released on bail, he and another family member were forced to attend ‘re-education’ classes with an Islamic cleric. After four lessons, Hamed refused to return.

Hamed’s case was delayed due to Covid-19. He was eventually sentenced in April, and his appeal was rejected in June.

Before submitting himself to Karaj’s Central Prison on 27 July, Hamed recorded a short video explaining that he had been arrested for Christian activities. “I thank God for considering me worthy of enduring this persecution because of Him,” he shared.

Latest in string of arrests

Hamed’s case reflects the intense surveillance of Christians’ activities by the Iranian authorities, who see them as an attempt to undermine the Islamic rule in the country. Arrests of believers are sadly all too common. In June, three Christian men were heavily fined and given five-year prison sentences based on a recent amendment to the Iranian penal code.