Some good news! After the war, rebuilding lives and communities in Iraq will take many years, but signs of hope are emerging. In Qaraqosh, a town with the largest population of Christians in the Ninevah Plains, around 5,000 families have returned. And recently, the town library was re-opened.

In 2014, the town itself was completely taken over by soldiers from the so-called Islamic State (IS). They destroyed homes, business and churches – the scale of the devastation was vast. They targeted any Christian symbols and buildings. The library, full of Christian books, was ransacked and set alight.

When IS were driven out, gradually the rebuilding began. And the library has been a focus for the returning community. With funding from Open Doors supporters, working through a local Open Doors partner, new books could be added to the small number that were rescued. The building could be reconstructed.

“It rose from the black ruins and demolition debris,” said Father Duraid, who supervised the project. “We dream that it will be a space where intellectuals, students, authors, poets and other readers from our village can meet or do research.”

The library is part of Qaraqosh’s Christian centre for social and cultural activities, including art exhibitions, Christian education and other church-related activities. 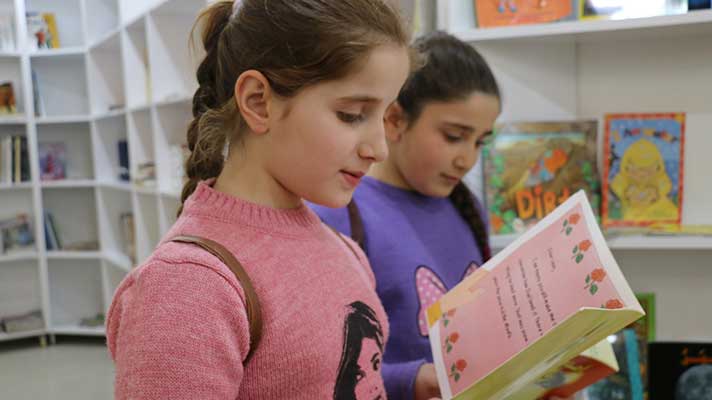 “I believe the library is very important for motivating people to read and become better educated,” says Labib al Katib, a member of the church committee. “Despite huge destruction that still exists around us, people have already started to ask about this library for their scientific research or studies. We worked hard to renovate it, to turn it into a centre where educated youth, authors, readers and students will get together.”

Where is this happening?

Iraq is number 13 on the Open Doors’ World Watch List, a ranking of 50 countries where it is most difficult to live as a Christian. Islamic extremism is still a problem in Iraq. Although IS have lost territory in Iraq, their ideology remains. Many of the militants have simply blended back into the general population. But many courageous families have returned, and are rebuilding their lives and communities.

Join the Blackout for silenced Christians!

Sign up to go screen free and get sponsored to shut down your devices for anything from 6 to 48 hours. Raise money, prayer and awareness for silenced Christians like those in Iraq. Sign up and get a free pack!