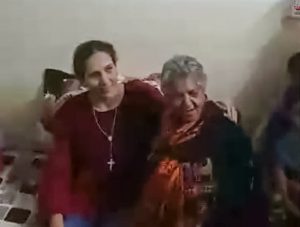 Good news. Three years after being captured by the self-proclaimed Islamic State (IS), Rana Esso (pictured on the left, most likely with her mother), a Christian woman, has been released!

She returned home to her family in Qaraqosh last Monday (28 August). She was liberated in the suburbs of Tal Afar in north west Iraq.

Video footage on social media show Rana’s return being celebrated by a cheering crowd, with local music and dance of Christians in Qaraqosh. A local contact of Open Doors says, “All Qaraqosh people were celebrating her release!”

Three Yazidi women were also released with Rana, though very little information is known about them currently. The Yazidi population, an independent religious minority in Iraq, suffered severely under the reign of IS in this region of Iraq.

The release of Rana and Yazidi women follows a week of intense fighting in and around Tal Afar, which is seen as one of the last remaining strongholds in Iraq.

Where is Tal Afar?

Pray. Pray for people like Rana that you’ve read about in this article. Ask God to protect them, give them strength, and provide for all their needs. Pray for energy and wisdom for Open Doors partners working to support believers in the region. Ask God to continue to use His church in the Middle East as a light in the darkness. Get prayer resources here…

Give. Every £11 could provide a week’s worth of emergency food supplies for a displaced family in Syria. Give here…

Speak out. Sign the One Million Voices of Hope petition, calling for equality, dignity and responsibility for Christians and other minorities in Syria and Iraq. Ask others to sign it too. Sign now…

Join the Blackout. Spend a weekend offline. Give up your digital voice to stand with the voiceless. Raise money and prayer to amplify their silence. Find out more…

The view over Qaraqosh, Rana’s home town in Iraq, with the church in the distance.