Many parts of the Nineveh Plain in Iraq were taken over by the so-called Islamic State in 2014. But in the last year large portions of land have been liberated, giving hope to the families who were forced to flee that they will be able to return home.

But, things are not as straight forward as simply going home; security is still a concern, many villages have been left without basic infrastructure such as water and electricity, and many houses will need to be completely rebuilt. Thanks to your prayers and gifts, Open Doors partners are helping families to repair their homes, and provide micro-loans and grants to help believers start small businesses, so they can rebuild their lives and provide for their families.

As Gabriel, a church leader from Al Qosh, walks around the liberated village of Batanya, he says, “There were 750 Christian families living here when IS came. Four hundred of them already left the country. The rest will have huge problems returning here. Look around you, everything is destroyed.” Batanya was shelled and bombed for days as the allied forces attempted to drive IS from the village – local Christians claim it is the most destroyed village in the Nineveh Plain.

It will take a long time and a huge amount of work to help families return to villages like this, but some are determined to stay in Iraq and rebuild. Not far from Batanya is another village called Telskuf, where the fighting was much less intense – 50 families have returned here.

Nidal and Janan, sisters with six children, left Telskuf with their families to escape IS in 2014, and have been living in the Kurdish town of Dahuk. While they were there, they received food packages and emergency relief from Open Doors local partners. “That kept us alive and hopeful and helped us hope for better times,” Nidal says. “And better times have come! Today I’m happier than ever. I’m home.”

They were one of the first families to return to Telskuf. Their home was ransacked by IS, but the damage to the building was fairly limited. The infrastructure of the village still needs to be restored, but Nidal is still glad to be back. “We had water and electricity there [in Dahuk], but it was not home. This place doesn’t have all that, but it’s home,” she says. 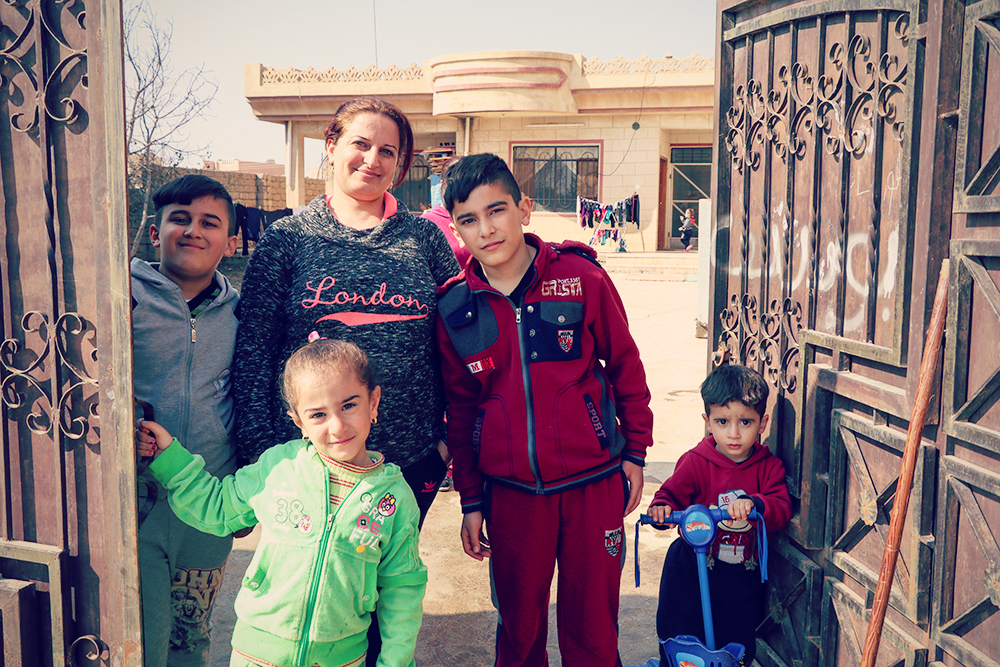 Janan and her children in front of their home in Telskuf

When asked if they thought of leaving Iraq, Nidal says, “We belong here. No way am I leaving this country. That is why we chose to return here as soon as we could – to show others it is possible. By returning here we also give hope to our children, we show the new generation that they have a future in Iraq.

“Life is not easy here, there is no school for the children. My brother-in-law has to drive them to a village 15 minutes away from here every day. But the good news is that life goes on. Every day is new; we believe in Christ. He will help us through this period, He keeps us strong.”

Open Doors partners are helping families like Nadal’s to repair their homes, and providing micro-loans and grants to help believers start small businesses, so they can rebuild their lives and provide for their families. But this is only possible with your support.

Three ways you can help

1. Pray. Use the points below, and order our free prayer resources…
2. Give. Give online now to help people like Nidal in Iraq rebuild their lives. You can also order our free ‘Walk, bake, ride, run… With Them’ fundraising pack to help you raise money too!
3. Speak up. Sign the One Million Voices of Hope petition and call for a future of safety and dignity for Christians in the Middle East.