Iraq: How Christmas is celebrated?

With Christmas upon us, we asked Areen*, an Iraqi Christian to describe how Christmas is celebrated in her country.

“In Iraq, only the Christians get an official public holiday on the 25 December,” she says. “In the Kurdish region it is a day off for all people, with schools and most businesses closed. Despite the wars, the forced displacement, the bombing of many churches and the suffering of the population, Christians in Iraq stayed faithful to their traditions every year. They consider this feast as a hopeful message of salvation to humanity because of the birth of the Saviour, Jesus. You can describe Christmas as a day full of joy, love, kindness and family meetings.”

Some days before Christmas, preparations at home start with decorating the Christmas tree, often with the whole family around. Areen says, “The Christmas tree is common in Christian homes and, with its red and green ornaments and the star on the top, looks a lot like the trees you see all over world. Under the tree you’ll find the presents that Santa Claus put there. Most prominent among the preparations is the preparing of special pastries called Kaleja (or Kleicha – a sweet biscuit usually filled with dates) and other delicious Iraqi foods that will be eaten during the Christmas feast.” 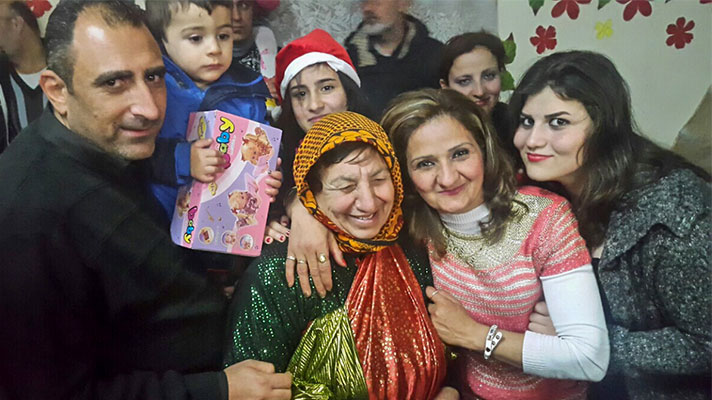 On Christmas Eve in the afternoon, Christian families gather in the church square for the for a service focussed around a big bonfire.

“In the Syriac language, the fire is called Tahra. That word means ‘astonishment’. The fire is in the middle of the church square; the believers stand around it and the deacons hold the lighted candles. All those present sing hymns of praise in the Aramaic language,” Areen says. “After that, the priest will carry an image or statue of the baby Jesus. With this traditional celebration they express the joy the child brought to humanity. The fire is to remember the fire of the shepherds when the angels told them about the birth of Jesus.

“In Iraqi churches and the homes of Christians, you will also see cribs, though of course there are decorations in all Christian houses and shops. Children especially look forward every year to Christmas night when Santa Claus and his helpers – mainly the church youth – make their tour in decorated cars to bring their presents. Children and families will come out of their homes to greet them with joy.

There are decorations in all Christian houses and shops.

“Later that day, during the night of the 24 to 25 December, churches have the Christmas Mass, which is celebrated in the middle of the night. After mass, believers exchange their Christmas wishes with each other. Some churches in Iraq are unable to hold the midnight mass because of the security situation. 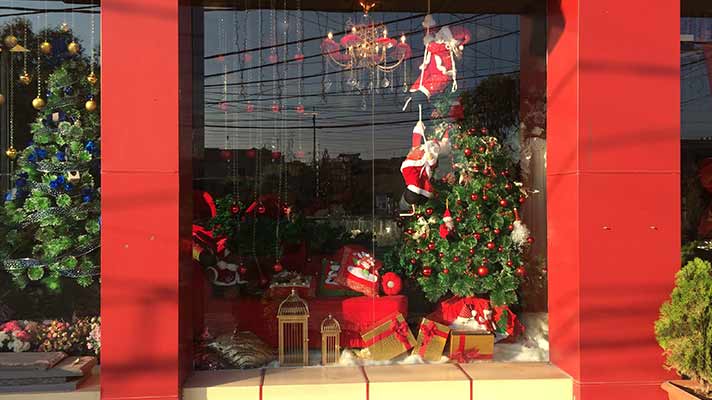 “On Christmas morning, Christians usually go to church in their new clothes to participate in mass. After that, families, friends and relatives meet in the churchyard to distribute sweets and exchange Christmas wishes and blessings.

“On Christmas day, families visit each other, enjoy the Christmas meal, and give money (Eidia) to little children for sweets. The youth usually meet at parties in youth centres.”

Areen ends with a prayer request: “Let’s pray for the coming Christmas – that it will bring peace and safety to Iraqi Christians in their difficult times.”

What you can do now: Invite your MP…

Our church family in Iraq also still need us to speak out for them. This time last year, Father Daniel, an Open Doors local church partner in Iraq, presented the Hope for the Middle East petition in UK Parliament. Since then, the government has created a new role – Prime Minster’s Special Envoy on Freedom of Religion or Belief – to focus on the challenges facing persecuted Christians and other religious minorities, and Father Daniel’s visit was specifically mentioned as one of the reasons for the creation of this role.

Father Daniel is thankful for this step, but believes that more still needs to be done for Christians in Iraq. He says, “We feel that we don’t have any rights in our country. So we need the help of someone who has the power to make our voice heard in the Iraqi government.” You can continue to speak out for believers like him by inviting your MP to the 2019 World Watch List launch in Parliament.