Kazakhstan: Update on Akim and his sisters who were thrown out for choosing Jesus

Back in April we wrote about student Akim and his two sisters in Central Asia, who had fled their family home because of abuse from their father after he discovered they had become Christians. We recently got this update through about their situation.

The two sisters recently graduated from high school and one of them will start an introductory course for one of the most prestigious universities in Central Asia later this year! The second sister will turn 18 in October and plans to enter a Bible college. They still live in the apartment far away from their father that was provided by Open Doors partners.

Lastly, Akim is continuing his university studies and serves with a church in a different city. His tooth has healed well. Since they all left, Akim has met his father once when picking up some documents, but the sisters have so far avoided meeting up or having any contact with him. They are praying for their father and plan to talk with him by video at some point.

Thank you for praying for this family. Please continue to pray that their father will find and accept Christ and that he will be a good father to his children. Pray for restoration, forgiveness and hope in this broken family.

Original Story: 11 April 2022
Please pray for student Akim and his two teenage sisters who have fled home because of threats and violence from their father.

Akim (not his real name) has been a Christian for two years – and a year ago, his two younger sisters also choose to follow Jesus too. Their father, a Muslim, has been away working for the last few years, but has recently returned home. When he found out that his daughters had become Christians he beat them and began to force them to memorise passages from the Quran.

Being a student, Akim wasn’t living at home, and his sisters were afraid to tell him about how their father was treating them. But, the girls shared their situation with their pastor, who then got in touch with Akim.

Akim tried to reason with his father, but he too was beaten and threatened – one of Akim’s front teeth was broken in the attack. Their father was in a complete rage, threatening to kill his children, all because they had chosen to follow Jesus. 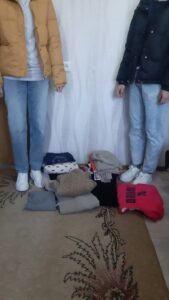 With help from their neighbours, Akim and his sisters managed to get out of their father’s house. A local Christian family took them in, and since they’ve found support and help from a local church, who have bought clothes (see the pic) and supplies for the sisters and helped pay to get Akim’s broken tooth fixed. Open Doors partners are paying for an appartment for Akim and his sisters in a town far from the village where their father lives – because the girls won’t both be over 18 until later this year, if the authorities get involved, they will most likely make them go back to live with their father.

Lord God, be with Akim and his two sisters. Help them know that you are a kind, loving and generous father. Help them know your peace, provision and presence. We pray for healing from the trauma of being threatened, beaten and rejected by their own dad. Bring a strong church family around them that will support and encourage them. Help them with their education and to discover your call on their lives. I also pray for their dad. Help him see he has done wrong – and help him see the truth of Jesus and seek forgiveness for his behaviour. Amen.