Laos: Homes of Christians under threat 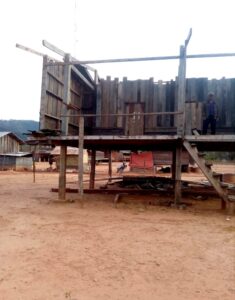 Sompong’s house after the typhoon hit

In January this year, four families in southern Laos received a written notice from the village chief, which was also signed by the district governor, telling them to leave the village as their Christian faith is causing disunity in the community.

The tension started after the chief prohibited Sompong* and 19 other Christian believers from repairing their houses after they were destroyed by a typhoon in late 2020. Sompong said that most of the affected families received help from the government and were able to rebuild their homes, except for the Christians.

Sompong’s village is Buddhist. His family of seven became the first Christians in the village after one of his daughters was healed miraculously from an illness in early 2020. Because of their example, 13 other villagers also committed their lives to Christ. However, the village chief and other villagers are angry that their new faith means the Christians don’t participate in village ceremonies or offerings to Buddhist monks.

Local communities in Laos are expected to support Buddhist monks in their area. Sompong’s village has only 80 residents, and with 25% becoming Christians, that’s a big loss to the community’s obligation to sustain the needs of the monks. The chief gave the believers an ultimatum to maintain the offerings to the monks or leave.

In mid-May, the 20 believers had no choice but to leave their homes and live in a makeshift house in their rice field, away from the community. But not long after, the community cut their water supply. After several conversations with local government officials, their water supply was restored, and they were also promised that 20 sacks of rice would be given to them. Open Doors local partners have also provided these believers with food, and helped religious leaders who lobbied their case to the local government. 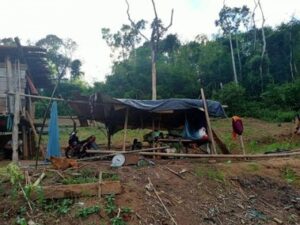 The make-shift home the Christians have been living in

In a separate incident earlier this year, also in southern Laos, the homes of three families were demolished by local villagers. On 31st January a group of men came and started smashing the walls and roofs of their houses. This happened because the families had recently become Christians. When some in the community found out, they tried to get the families to change their decision.

On multiple occasions the families refused to sign documents recanting their faith. Not long after that, the attacks happened.

The new believers had to live under the custody of the district’s Home Affairs Office until mid-April when they returned to their village and built a temporary shelter. The local government promised to build them a house but later passed the responsibility to local Christian leaders. In early July, together with the Christian leaders, Open Doors local partners helped in rebuilding the houses for the three families. At the moment, the construction is still ongoing.