Life in Mosul: One year on…

It’s been a year since IS militants took control of the Iraqi city of Mosul and launched an offensive that captured large amounts of land across the country. The capture of Mosul was especially shocking. The city was home to up to 60,000 Christians, but since last June, few, if any, remain.

As IS gained control of the city, Christian homes were marked with the Arabic symbol for the letter ‘N’, meaning Nazarene, a shorthand for Christian. Minority groups were given a choice, convert to the strict views of Islam that IS supports, leave, pay an expensive tax, or die. Many chose to leave, fleeing the city for the safety of Erbil in the North.

BBC sources have reported on what life is like in Mosul after a year of IS governance. The picture painted is pretty bleak, as these quotes highlight:

This reflection is by Mariam, a gynaecologist who is a Christian:

“I’m known to be an avid reader and own a large collection of books. My collection kept on growing as friends and family leaving Iraq used to send me their books because they knew I wasn’t going to leave and that I would take care of them.

I escaped with my body unharmed, but my soul remained where I had left it: at home with my books.

“I was threatened and harassed [by Sunni extremists] before the capture of Mosul, but I kept on delivering babies for women from all religions and sects. I never differentiate between my patients as I believe everyone deserves equal care.

“However, I had to flee as Mosul fell. I escaped with my body unharmed, but my soul remained where I had left it: at home with my books.

“After moving to Erbil I received shocking news: Islamic State had confiscated my house and marked it with the letter ‘N’ [for Nasrani – a word used by IS to refer to Christians]. I immediately telephoned my friends in Mosul and begged them to save my books.

“But it was too late. They called back saying my library had been emptied onto the street. However, some of my neighbours were able to rescue some precious books that remain hidden.”

Islamic State’s strict views mean that women must cover not just their faces, but whole bodies, including their hands…

“We had heard stories of men being flogged because their wives didn’t put their gloves on. Another woman’s parents were banned from driving their car. Those who objected would be beaten and humiliated.
Hannaa

Fouad retells some of his own story…

“Then they tortured me. The guy who did it wouldn’t stop unless he got tired. He was edgy all the time and he wouldn’t listen to what his prisoners said. He flogged me with a power cable and also tortured me psychologically.

“When my brother handed himself in, they found out that the accusations against him were false but they still kept me in prison until they judged me well enough to leave.

“They had hit me so hard with the cable that the marks are still visible on my back.”

How are Open Doors responding?

Check out this infographic to see some of the statistics coming out of the wars in Iraq and Syria and to see how Open Doors is helping in the region. 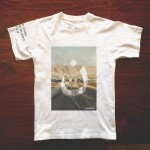 Stand with Iraqi Christians and we out the N symbol that was used to mark Christian homes and businesses in Mosul.

The image is from Flickr user DVIDSHUB and shows Iraqi children in Mosul from 2009. See the original here…