Father Daniel, an Open Doors partner from Erbil, Iraq, had the opportunity to meet with Prime Minister Theresa May on Wednesday 13th December. 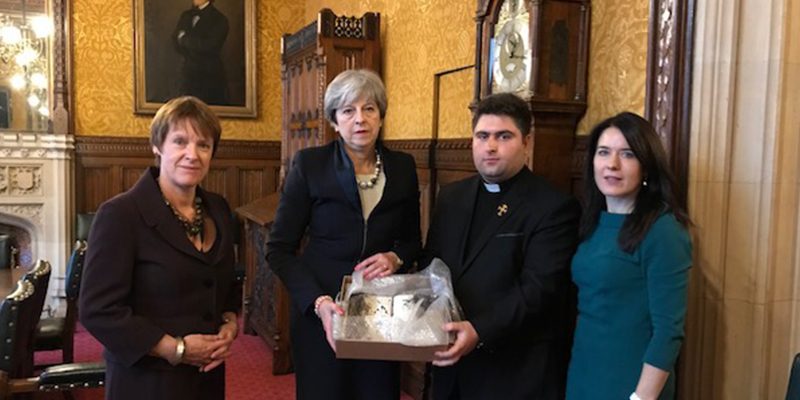 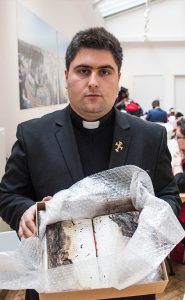 Father Daniel gave the Prime Minister the gift of an Arabic Bible, retrieved from a church in Karamles, Iraq, that had been burned by the self-proclaimed Islamic State. The survival of the Bible symbolises the hope which the Christian community in Iraq continue to hold on to.

At the time that the meeting with the Prime Minister was taking place, around 75 Open Doors supporters gathered in Parliament Square, dressed as nativity-style Marys and Josephs, to demonstrate that Christians are still looking for ‘room’ in the Middle East today.

Later in the day, Father Daniel addressed MPs in a briefing hosted by Dame Caroline Spelman MP and Kate Green MP. The event was entitled ‘Hope for the Middle East: What next for Iraq and Syria?’

Caroline Spelman and Kate Green opened the event, speaking of their moving encounters with women who had been abused by the self-proclaimed Islamic State in the Middle East. 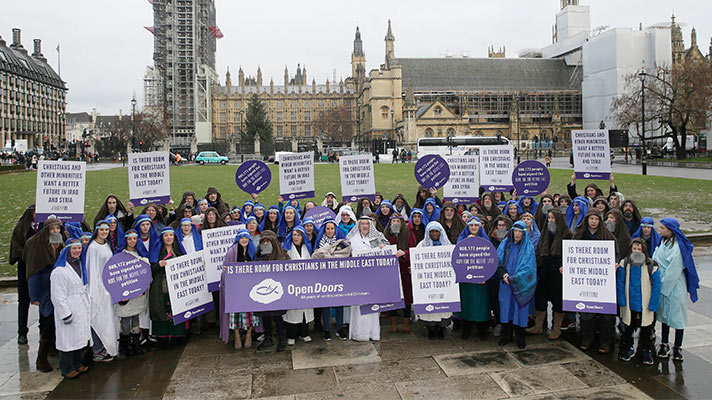 Father Daniel spoke to the group, describing the challenges facing Christians in Iraq. He said, “I believe that my people may be gone in the near future… that depends on your actions. We are on the frontline, but we are not afraid. Please help us.”

Lisa Pearce, CEO of Open Doors UK & Ireland, outlined the calls of the Hope for the Middle East petition, asking for equality, dignity, and a role in bringing reconciliation for Christians and other minorities in Iraq and Syria. “They’re targeted, they’re exhausted, and they feel that to the outside world they’re invisible,” she said.

Alistair Burt MP, Minister of State for the Foreign and Commonwealth Office and the Department for International Development then addressed the meeting, speaking of the need for good governance and tolerance in the Middle East.

In Kate Green’s introduction, she said, “I became involved with Open Doors because people in my constituency asked me to be.” We hear this on a regular basis from MPs that we meet with – your voice really does make a difference! Thank you to everyone who wrote to their MP or met with their MP to let them know about the Hope for the Middle East campaign, to everyone who signed the petition, to everyone who asked others to sign the petition, and to everyone who prayed. None of the events of this week would have been possible without the support of people like you.

So what next? Let’s keep speaking out for our persecuted brothers and sisters around the world – invite your MP to the launch of the 2018 World Watch List in parliament on 17 January.

And please continue to pray for Prime Minister Theresa May, the MPs who were at the briefing, and other world leaders who heard about the Hope for the Middle East campaign this week. Pray for wisdom for them to know how to act to support our persecuted church family