You may have heard about the situation unfolding in Myanmar – over the last week, the military have taken over the country and arrested the democratically elected leader, Aung San Suu Kyi. Many are appalled, and over the weekend, tens of thousands of people protested against the military takeover. The angry public grew uneasy as the government banned internet access on Saturday morning.

The situation has worried the countries Christians – especially as a hardline Buddhist group has shown support of the military and is actively promoting the importance of Buddhism in Myanmar. If this group gains more power, then Christians who are already under pressure, could find their situation becomes more precarious.

Brother Lwin*, another local partner, highlights what this means for the church. “Military rule could mean reinforced power for the dominant religion,” he explains. “The military government of the past has always been protective of their Buddhist culture and tradition. This may have serious implications for the church. We are expecting restrictions on the church to happen once again, though as yet we’re unsure of the extent and form it will take.”

And with the army shutting off internet access to try and hinder the protests, church activity is being disrupted too. 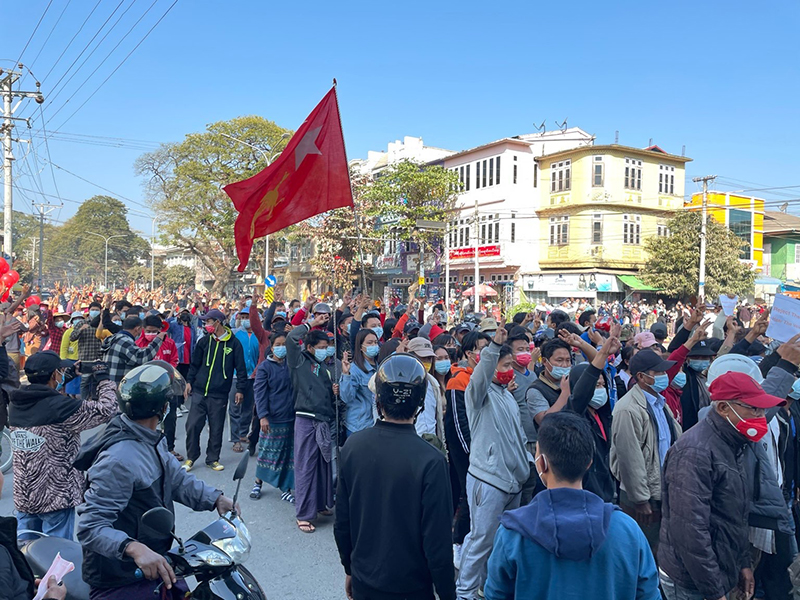 Image: Protests at the weekend happened across the whole country…

‘The number of protestors have been increasing…’

“The tension between the Myanmar’s pro-democratic supporters and the military remains volatile,” shares Daisy, Open Doors’ local partner. “Police stood in two lines barricading the path for the protestors. If protestors cross the first line, they will be shot at sight. The protest will intensify in coming days and the number of protestors have been increasing each day.”

Pastor Ko Ko Thun*, an elderly pastor tells Open Doors: “When I recall the previous military junta, I become so angry and upset that I want to vomit.”

“When I was still a student, I remember them checking me and my friends’ identity cards and making us stand under the rain. They also confiscated our books. Once, we carried our own rice to cook in our hostel, and the soldiers accused us of supplying rice to the insurgent groups and detained us.”

“There are many things I can share,” Ko Ko Thun continues. “When I think deeply, if the military is going to rule over us again – I cannot, I dare not imagine – my tears can’t stop.”

Many believers are fearful that the same situation like the 1988 uprising will happen again, but our local partners continue to have peace in God. “It’s amazing how God allows us to communicate inside the country today,” says Min Thaing, an Open Doors field partner. Around 500 workers gathered on the streets to protest in Min Thaing’s neighborhood on Saturday, and the police and military have been on high alert.

“Yesterday, we were totally cut off, today, we are able to connect again. We feel left out when there is an internet blackout, but now we are able to share updates and videos and photos. It is amazing how God works and allows us to connect by making internet connection available on time. The internet availability here is uncertain and unpredictable, it may not be available in the evening or tomorrow, but we have a God who can part the seas and we know that He will make a way for us.”

Buddhist monks at a temple in Myanmar