Nigeria: Leah has been missing for one year 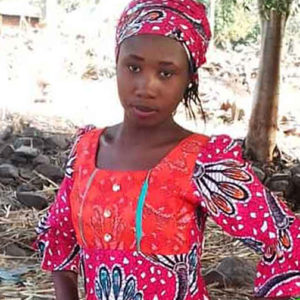 A year ago today, gunmen from the Islamic extremist group, Boko Haram, stormed a school in Dapchi, Nigeria and kidnapped over 100 girls. While others were released within a month, Leah, the only Christian in the group, remains in captivity because she has refused to deny her faith. She was given the opportunity to go free, but only if she converted to Islam. She chose not to and remains in the hands of her kidnappers. She was just 15 at the time.

Leah’s mother, Rebecca Sharibu, has called on the Nigerian government to expedite her release. Speaking in tears at a press conference held in capital Abuja on 10 February, Rebecca renewed her appeal to the Federal Government to keep its promise to rescue Leah.

Zoe Smith, Head of Advocacy at Open Doors UK, said: “Leah Sharibu was kidnapped because she was a girl and held captive because she was a Christian. She personifies the incredibly vulnerable position of Christian women in northern Nigeria. It is saddening and outrageous that Leah remains in captivity. We urge the Nigerian government and the international community to increase their efforts to secure her release and reunite her safely with her family.”

Why wasn’t she released?

After the captured girls were released, Leah’s mother, Rebecca Sharibu, explained what she had heard from Leah’s friends who had escaped: “(Leah) was about to board the vehicle that was to bring them back. Then Boko Haram said she must convert. Her friends said they tried to convince her but she said she will not convert to Islam. Boko Haram said since she will not convert to Islam she should remain behind.”

Leah reportedly asked her departing classmates to pray for her and to give her mother a message: “My mother, you should not be disturbed. I know it is not easy missing me, but I want to assure you that I am fine where I am. My God, whom we have been praying to with you, is showing Himself mighty in my trying moment. I know your words to me during our morning devotions that God is very close to people in pain. I am witnessing this now. I am confident that one day I shall see your face again. If not here, then there at the bosom of our Lord Jesus Christ.”

Last October, Islamic State West African Province (ISWAP), a breakaway faction of Boko Haram, announced it will keep Leah Sharibu as a slave for life along with Alice Ngaddah, a Christian mother of two who works for Unicef. “From today,” ISWAP said, “Sharibu, 15, and Ngaddah are now our slaves. Based on our doctrines, it is now lawful for us to do whatever we want to do with them.”

‘Do not get tired of praying for her’

Leah’s mother, Rebecca, has asked for continued prayers for Leah, saying, “I know that all over the world believers are praying and advocating for the release of my daughter, but until now I haven’t seen my Leah. I want to plead that Christians: do not get tired of praying for her, ’til she is returned.”

Nigeria is number 12 on the 2019 World Watch List, Open Doors’ annual ranking of the 50 countries where Christians face the most extreme persecution. Open Doors partners with the local church to strengthen and equip persecuted Christians in northern Nigeria through training, education for children, care and discipleship training for new Christians, community development projects, legal assistance, emergency relief and trauma counselling.

Get our new Guts and Courage resource to learn more about Leah and the places in the world where Christians face pressure, violence and intimidation for their faith and get inspired to live out your walk with God with more boldness…