Esther* was 17 when Boko Haram militants attacked her town, Gwoza, in October 2015.

Up until then, her life had been fairly normal. She went to school, and helped to look after her elderly Dad; her mother passed away when she was younger.

But when the militants attacked Gwoza, they struck down Esther’s father, who later died, and carried Esther away into the Sambisa forest, along with several other young women.

The Boko Haram militants used various methods to try to make the girls renounce their faith in Christ. First they said they would treat them more favourably; when that didn’t work, they turned to threats and intimidation.

Many of Esther’s captors wanted her as a wife. But Esther was determined not to give in. “If I perish, I perish, but I will not become a Muslim,” she decided in her heart. Horrifically, the militants, didn’t leave her alone. She was abused by many of her captors.

“Each passing day, I hated myself more and more. I felt that God had forsaken me. There were times when I was so angry with God… But still I could not get myself to renounce Him. I found myself remembering His promise to never leave me or forsake me.”

Because of the abuse, Esther fell pregnant. She doesn’t know who the father is. “I had no idea how on earth I would ever be able to love this child.” But God has helped Esther to love her daughter, Rebecca, and today she says, “She has become my joy and laughter amidst sadness.” 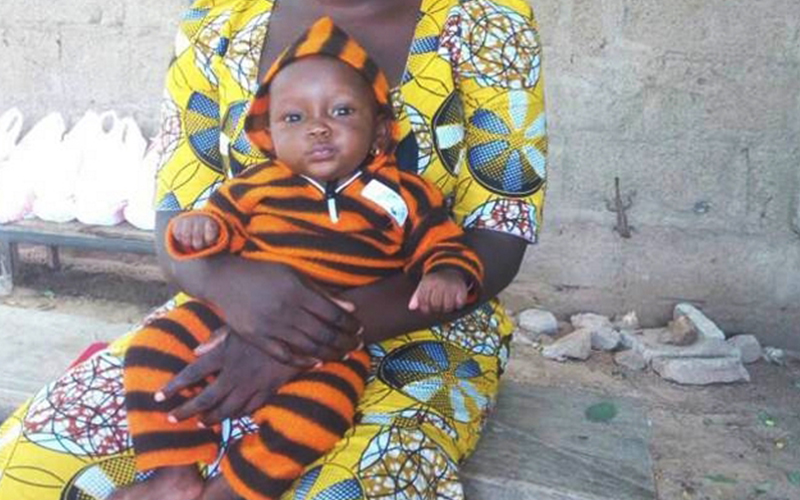 Esther holds little Rebecca, her ‘joy and laughter’. Both are now doing much better, thanks to trauma care and help from Open Doors partners.

The military rescued Esther and some others around November 2016. Esther went to live with her grandparents, but people were not so eager to welcome back the ‘Boko Haram women’.

Esther says, “They mocked me because I was pregnant. I felt so lonely. What broke my heart even more was that they refused to call my daughter ‘Rebecca’. They referred to her as ‘Boko’.”

Esther was put in touch with Open Doors through her church leaders, and she was invited to an Open Doors trauma care seminar. As part of the seminar, participants were invited to write their sorrows on a piece of paper and pin it to a hand-carved wooden cross at the venue, as an illustration of bringing their sorrows to the cross.

Esther said, “When I pinned that piece of paper to the cross it felt like I was handing all of my sorrow over to God. It felt light within me. When the trainer later removed all the pieces of paper from the cross and burnt it to ashes, I felt like my sorrow and shame disappeared, never to come back again.”

Today, both Esther and Rebecca are doing well. Even if people still struggle to accept her and her child, she is at peace with herself and what has happened to her. She says, “People have noticed a change. Some of those people who used to mock me now ask me my secret. I tell them, ‘I forgave my enemies and now trust God to take vengeance in His time’.”

Esther works on a farm and the grains she gets she uses to provide for herself, Rebecca and her grandparents. However, this is very little, so Esther has also received food aid from Open Doors to help support her and her family. Esther said, “I have no family other than Open Doors. After hearing my story, you did not despise me but encouraged me and showed me love. Thank you so much!”

Two things you can do…

1. Give a meaningful gift this Christmas: Help fund trauma counselling for children and young people like Esther. Give a gift worth giving through our Secret Santa for persecuted children campaign.

2. Pray now: Use the points below to pray for the children in this article.