Friday 19th February marks a tragic milestone. On this day three years ago, Boko Haram, an extremist Islamic militia, kidnapped over 100 girls from a school in a town called Dapchi in Yobe State Nigeria.

Of those girls, all who survived the initial raid were released within a month – all except one, Leah Sharibu. As she was due to be released, her Christian faith was discovered. Her captors said she could go free if she converted to Islam. She chose not to. And therefore wasn’t allowed to leave.

Leah chose Jesus over her freedom.

As the other girls were released, Leah gave this message to some of her friends to give to her mum:

“My mother you should not be disturbed… My God, whom we have been praying to with you, is showing Himself mighty in my trying moment… I am confident that one day I shall see your face again. If not here, then there with our Lord Jesus Christ.”

Three years on, she’s still in captivity. It’s likely Leah has been forced to marry one of the Boko Haram soldiers. A friend of the family, Rev. Gideon Para Mallam told Open Doors in an interview, “I think it is safe to say that Leah is alive. But the silence from her captors and from the federal government is absolutely not good. Indeed, no official news has come out about Leah this past year, neither from her kidnappers, nor from the Federal Government of Nigeria. The silence is troubling. …The parents deserve to be briefed by the government, at least covertly. But we are not getting any of that.”

Leah’s story is one of brave and determined faith – and she represents many thousands more who share her fate. In the last year, despite more pressure from armies in Chad and Nigeria, Boko Haram have still continued to take people captive. Not even Covid19 has been able to slow them down.

In one day in December, just before Christmas, they kidnapped 70 people. They killed over 50 people. And then again, on Christmas eve, they went to a number of villages in the Garkida area in Adamawa State and kidnapped a number of Christians. And there was also an attack by Boko Haram on a rice farm in which they killed a little over a hundred people. They are still causing havoc. 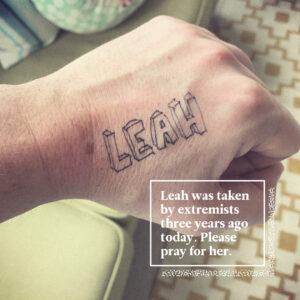 Leah turns 18 in May, and we want to ensure that her story, and the story of thousands of others like hers, is not forgotten. So, why not write Leah’s name on your hand. Keep it there for a day, and every time you see her name, pray for her. Not sure what to pray. Try these quick points: