North Korea: How is Jesus known?

North Korea is once again number one on the World Watch List, Open Doors’ annual ranking of the 50 countries where Christians face the most extreme persecution.

But it’s not because it isn’t a religious nation – in fact, North Korea is the most religious country on earth. Its 22 million citizens are forced to worship Kim Jong-Un and his father and grandfather, who are said to have supernatural powers. “The worship is not subtle,” says Ron Boyd Macmillan in his book Faith That Endures. “You can see bands of school children laying offerings at the feet of huge golden statues of these figures at the centre of every town.”

Christians are considered enemies of the state because they dare to believe in a higher authority than the Kim family. They keep their faith completely secret – if discovered, they are sent to a labour camp reminiscent of Dachau or Auschwitz.

And yet, amongst North Korea’s 22 million citizens, we believe there are around 300,000 Christians. How did the gospel first arrive here? The story is full of the miraculous. And it starts in Wales.

A heart for North Korea 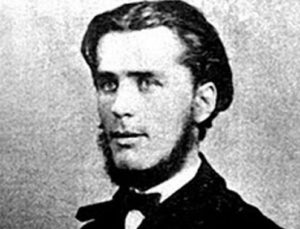 Robert Jermain Thomas was a Welsh missionary with a heart for Korea – but as no foreigners were allowed into the hermit kingdom in the middle of the nineteenth century, he went to China and bided his time. In 1866, he found his opportunity, and joined an American ship, the SS General Sherman, that was heading for Pyongyang in the hopes of trading with the Koreans. Thomas took as many copies of the Bible as he could carry, with the intention of finding scholars who spoke Chinese.

But he was never to fulfil his mission. The ship got stuck on a sandbank and the Koreans, fearful of attack, killed them all, including Thomas. It seemed the mission to bring the Good News to North Korea was doomed. But, not if God had anything to do with it.

Accounts differ in the fine detail as to what happened, but somehow those Chinese scriptures made it to shore. Years later, it was discovered that a local Korean had used pages from a Chinese Bible (assumed to be one of the Bibles taken by Thomas) to wallpaper his house. As people read the walls, the Christian gospel spread. Within fifteen years, Pyongyang became a strong Christian centre with a hundred churches.

The light shines in the darkness

Today, there are just four churches in Pyongyang, and defectors testify that these churches serve as showpieces – an attempt to demonstrate religious freedom to the outside world. Christians are forced to meet in absolute secret, often in groups of no more than two or three.

And yet, this hasn’t stopped the church from growing. And the gospel continues to reach North Korea in amazing ways. It should be impossible, but your support and prayers are enabling Open Doors underground workers to smuggle illegal Bibles into the country, as well as enough food to keep 60,000 believers alive. Churches are being planted in prison toilets. The light of Christ continues to shine in the hearts of 300,000 of our brothers and sisters, even in the darkest place on earth.

Your prayers and gifts can help this light to continue to shine. Just £6 could help provide a single survival pack for a secret Christian in North Korea.

Pray this for North Korea

Lord Jesus, please protect those who follow You in North Korea, especially those who suffer in labour camps and prisons. Protect Open Doors secret workers as they smuggle in vital support. Please work in the heart of North Korea’s leader, Kim Jong-Un, and give him revelations of You. Lord, please break the power of evil in this country, so that Christians may be free to worship you. Amen.

Get inspired to live out your faith with guts and courage…

Robert Jermain Thomas lived out his faith with immense guts and courage – get your free copy of our new World Watch List to learn more about the places in the world where Christians face pressure, violence and intimidation for their faith and get inspired to live out your walk with God with more boldness…