Growing up in North Korea is not easy. When Seojun was younger, his focus in life wasn’t friends, football, gaming or even school – he was simply focussed on trying to survive.

He had to work the land and sell herbs to try to make ends meet. He recalls roaming the countryside for vegetables, seeking food on the mountainside, often going hungry:

“I had a very difficult time,” he says. “I made every effort just to get a warm bowl of rice. I really put in a lot of effort. And I always used to wonder, ‘How am I going to live a happy life with my family?'”

At just 17, he was desperate and with nothing to lose, so he decided to cross the Tumen River, enter China and bring back food for his family. He left with only his school uniform and a winter jacket.

But life remained harsh in China. He found work in different places, mainly manual labour, but wasn’t paid much. All the while he was trying to avoid being caught and sent back to North Korea.

God was protecting me…

The lack of food, lack of shelter and lack of security left Seojun with little hope. All he wanted was to find rest and peace. But God saw Seojun in his exhaustion, and had better plans.

“There was one Chinese-Korean man I knew who went to church,” says Seojun. “He asked me if I wanted to meet a missionary.”

Up to that point, the only thing Seojun knew about Christians and Christianity was what he had learned at school – that Christians should never be trusted. Superstitious and weak-minded, Christians were a ‘threat’ to North Korean life. “The missionaries were described as the murderers” he says.

But he was so tired that he took up the opportunity of shelter and rest at what was, in fact, an Open Doors safe house.

“Simply because they offered a place to live and all sorts of provisions and support, I decided to go to the safe house. And so I met the missionary. I started reading the Bible a little. And curiosity arose in me. I started praying as well. I prayed that, if God were alive – the God who carries out all the miraculous stories in the Bible – that He would save me from being captured. And when the police came to check identities, they would skip me. They would check every single person ahead of me, but skip my turn. At times like that, I realised that God was protecting me.” 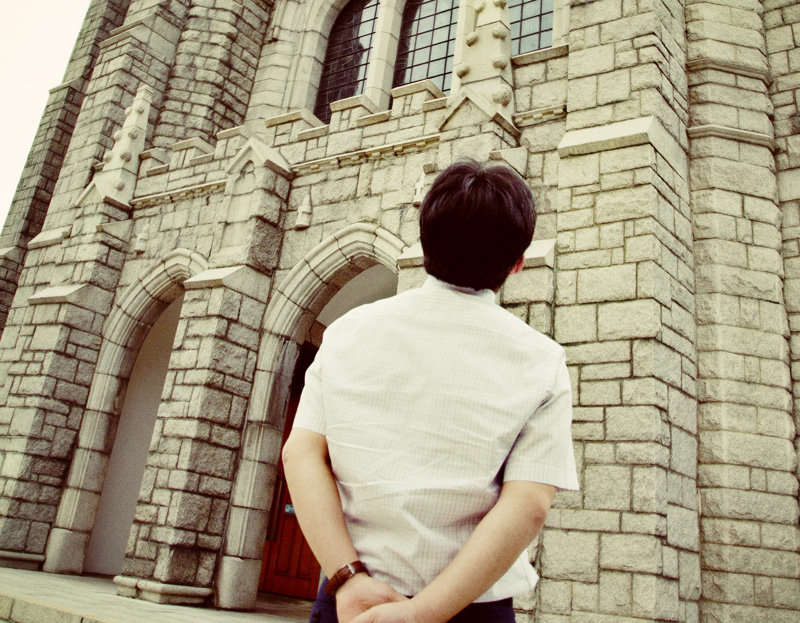 Image: Seojun outside a church in South Korea

After one year, Seojun became a Christian. He stayed at the safe house for a total of three years, receiving biblical teaching and discipleship. During that time, Seojun memorised 2,000 Bible verses with the hope of returning to North Korea to spread the gospel. But it was too risky to go back, so instead he went to Bible college in South Korea. Today, he is a church pastor there.

“Those verses that I loved during my time at the safety house are still a source of encouragement and I use them well.”

Keep praying and don’t give up.

“Not even one small offering or one time of prayer are in vain,” he says. “At God’s appointed time, the crops will flourish. The fruits will grow. With this in mind, please pray a lot.”

North Korea is the most dangerous place in the world to be a Christian. Here’s three things you can do now to help your secret church family in the country:

Pray: Lord Jesus, thank You for the courage of our North Korean brothers and sisters. We ask for Your protection and Your provision for them, so that the church may continue to grow and shine as a light in the darkness. May You flood the nation of North Korea with Your glory, Your truth and Your mercy. Amen.

Give: Every £15 could provide a monthly winter relief pack to help a North Korean believer survive. You can give here…

*Name has been changed for security reasons