North Korea is the hardest place in the world to be a Christian… so much so, that most Christians keep their faith a complete secret. If someone’s Christian faith is discovered in North Korea, it’s very likely that they’ll be sent to a horrendous labour camp for the rest of their lives. Tens of thousands of North Koreans end up in these terrible places, for many different reasons. Open Doors estimates that there are currently 50,000-70,000 Christians imprisoned in these camps. It’s the place where believers face the most extreme persecution.

The North Korean government doesn’t like to talk about these prison camps. They often deny they exist at all. So, it’s very, very rare that the outside world ever sees photographs of these prisoners. They are hidden from the world.

But Open Doors has received images of two prisoners, including the photo below. The photos have been smuggled out of the country – we can’t identify how, for security reasons. 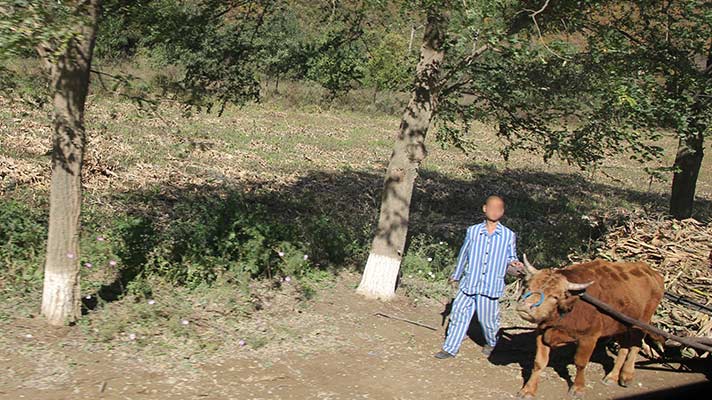 Image: A prisoner in North Korea

We don’t know who the man in this photo was, or why he has been imprisoned, or even which prison or labour camp he belongs to. He might be a Christian who has been imprisoned for his faith, or there may be any number of other reasons that he’s ended up where he is. He might not even know the reason himself.

These prisoners are allowed to do agricultural work outside the camp, which makes them the ‘lucky ones’ – because, though it’s illegal, they might have the opportunity to find edible plants, insects, snakes, rats or frogs. The food provision they get in a prison or labour camp is only about 500-600 calories per day. That’s about half the minimum recommended amount.

We’re sharing this photo because it shows the human reality of this tyrannical regime. When you pray for believers who are still in prison in North Korea, maybe it will help to picture this man.

Want to learn more about, and get inspired by, the brave faith of Christians living in some of the places most opposed to following Jesus? Get our awesome new 2020 World Watch List prayer map and stickers – it’s free. Plus we have an awesome session outline for youth leaders which includes a massive A1 map too. Get them for free at the link below: