Earlier in the year there was international outcry as a Sudanese court sentenced Meriam Ibrahim to death for refusing to deny Jesus. She was freed, but now, after a 5 year-long trial, Asia Bibi, a Christian mother of 5 from Pakistan, has finally been handed the same punishment after being found guilty of blasphemy. The death sentence was confirmed by the Lahore High Court this morning, according to Agenzia Fides. 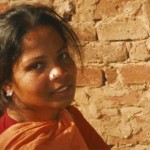 Asia was accused of blasphemy after a dispute with a Muslim colleague, and sentenced to death in 2010. Although the defence argued that the two Muslim women who witnessed the blasphemy lacked credibility and were obviously making false accusation, Judge Anwar ul Haq maintained that their allegations were valid and credible.

“Justice is increasingly in the hands of the extremists,” said Naeem Shakir, part of Asia’s defence team. They plan to appeal again to the Supreme Court, the final court of appeal in Pakistan.

Asia, a mother of five, was accused of blasphemy after a dispute with a Muslim colleague. She is the first woman to be given the death sentence under Pakistan’s blasphemy laws.

Asia’s appeal hearing was postponed six times before it was finally heard yesterday, mainly because none of the judges wanted to hear her case. By upholding the conviction, they know there will be a global outcry, but radical Muslims have said that any judge who allows Asia to go free will face the consequences.

This is not an empty threat. Punjab governor Salman Taseer and minorities minister Shahbaz Bhatti were assassinated in 2011 after calling for reforms to the blasphemy laws in support of Asia.
Source: Agenzia Fides

Pakistan: Forced to convert
Read more about how Pakistan, ranked 8th on the World Watch List…