Act now and pray for those suffering for their faith...
Prayer

You would have heard by now, but on Easter Sunday, at least 69 people were been killed and more than 280 injured in a suicide bombing attack on a park in Lahore, Pakistan. Most of the victims are women and children from Pakistan’s Christian community who were enjoying the Easter weekend. The attack has been claimed by a Pakistani Taliban faction which said it had targeted Christians.

The explosion occurred in a parking area, shockingly, close to the children’s swings in the park. The park is popular with Lahore’s Christian community and was packed with families celebrating the Easter weekend. According to a senior police officer, many families were leaving the park when the blast occurred.

‘The target were Christians’

The Taliban faction Jamaat-ul-Ahrar issued a statement claiming responsibility for the attack.

“The target were Christians,” a spokesman for the faction, Ehsanullah Ehsan, told the Reuters news agency while the Pakistan Express Tribune reports that he said, “We claim responsibility for the attack on Christians as they were celebrating Easter.”

The attack is the latest atrocity visited on Pakistan’s hard-pressed Christian community. Pakistan rose to no. 6 on the Open Doors 2016 World Watch List. The nation’s infamous blasphemy laws continue to be abused to settle personal scores, particularly against minorities, including Christians.

In other news from Pakistan, in the capital, Islamabad, police fired tear gas at an estimated 25,000 protesters, who were marching in support of a man who was recently executed for the murder of a Punjab governor. The protesters see the assassin as a religious hero. He killed the governor because he had defended Asia Bibi, a Christian woman jailed on blasphemy charges.

Please pray for the victims of the Lahore bomb blast. And pray for protection for Christian minorities elsewhere in the world. This attack is a painful reminder that, for persecuted Christians around the world, festivals such as Easter and Christmas are too often accompanied by violence and death.

Try this prayer from the Church of England… 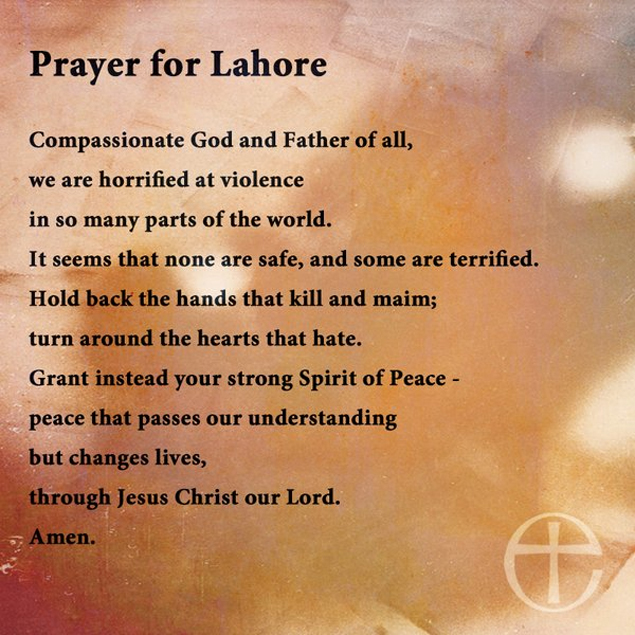 The image is of some children running to see a show at the Pakistan border. By Flickr user Sean Ellis. See the original image here…