There have been a few shocks so far in the World Cup – not least, Saudi Arabia beating Argentina in the group stages. But, whilst we might see the country as an under-dog on the footballing stage, inside the country, the tiny Christian population are the true underdogs, dealing with violence, arrest, prison and exclusion. Adam’s* story, highlights just what is at stake for those who choose to follow Jesus.

Adam grew up a Muslim. He comes from a Yemeni background but has spent most of his life in Saudi Arabia. When Eve*, his sister-in-law, became a Christian four years ago, her family asked Adam to convince her to return to Islam – but her faith inspired Adam to give his life to Jesus.

Since then, Adam has faced multiple charges – including inciting others away from Islam and helping Eve to flee the country because of persecution – and has spent time in prison. Last July, he sent his family abroad while he battled the accusations. A month later, Adam was convinced to join them following a brutal attack that left him severely wounded and visibly discouraged.

“I’d like to thank every brother and sister who prayed for me and contributed to getting us a place to live together,” Adam shares from a safe country where Open Doors local partners are helping the family settle. They have joined a church with other Yemeni believers. The two children are studying to become dentists.

Meanwhile, Adam is learning to shake off the false guilt that accompanied his escape. “It took a while for him to be freed from the feeling of failure,” says Hakeem*, a family friend. “We showed him the example of Paul in the Bible. When people searched for Paul, Christian friends helped him to flee the city [Acts 9:25].

“We don’t encourage Christians to leave their country,” Hakeem continues. “But this was an emergency. Adam had gone through too much, and it could put other Christians at risk. He was really in danger, that is why we helped him. If he had stayed, things wouldn’t look good for him and for others.”

“I feel that today I can live again,” Adam says. “Your prayers have been answered. What we need in this world is to turn to God in prayer for the church and for the sake of others. God listens to the true prayers. If we pray, we will feel His presence and we will have His guidance.” 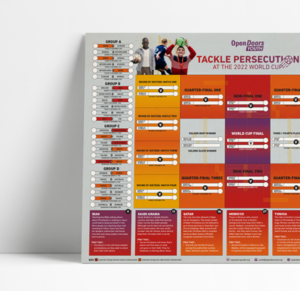 1. Get our free World Cup prayer wall chart and pray for Christians facing persecution from countries in the tournament.
Download yours here…