Somalia: How did it get to this?

Somalia is number 2 on the World Watch List, second only to North Korea for the persecution of Christians. To be discovered as a Christian means life-threatening danger, often leading to on-the-spot executions. Muslim background believers usually face beheading at the hands of extremists. But how did Somalia become like this?

The Independent Somali Republic formed when the British protectorate and Italian colony merged. France, Egypt, Britain and Italy all laid claims to parts of this region in the previous century.

Mohamed Siad Barre performs a coup and introduces ‘Scientific Socialism’, a left wing cult. In the course of this process, properties owned by Christian missions and churches, including schools and clinics are seized, and Christians are expelled from the country.

A new law is introduced giving women the same inheritance rights as men. Religious leaders preaching against this new law are imprisoned or executed. The secular and reformist nature of the government undermines the Islamic identity of the Somali people, leading to a revival of Islamic extremism and a growth of clan-based Islamic extremist organisations. They aim to turn Somalia into an Islamic state.

Somalia has a formal parliament for the first time in 20 years.

The government mainly controls towns and cities. Some of rural Somalia is in the hands of al-Shabaab, the militant Islamist group that has publicly declared it ‘wants Somalia free of any Christians’.

The constitution of Somaliland, part of Somalia, states: “Islam is the religion of the Somaliland state, and the promotion of any religion in the territory of Somaliland, other than Islam, is prohibited.” The constitution of Puntland, another area of Somalia, states: “Islam shall be the only Religion of the Regional Puntland State of Somalia. With the exception of Islam, no other religion can be spread in the Puntland State; the Laws and culture of the people shall be based on the Islamic Religion.”

With such a history of persecution, it seems impossible that anyone could come to faith in Somalia – but nothing is impossible with God. Technologies such as radio, television and the internet are enabling Somali people to hear the gospel, and we have brothers and sisters in this nation who are standing firm, despite the risks they face. An Open Doors contact has said: “Amid the hardest times of persecution and executions of Christians, they have remained steadfast holding on to their Christian faith secretly.” 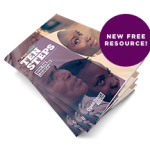 Say ‘Yes’: Support your family in the persecuted church…

There are an estimated 20 million Somali people on earth, scattered across 19 countries – more Somalis live outside of Somalia than within the country itself. Will you commit to pray and speak up for your persecuted family? We’ll give you help you on your journey by sending you some awesome free resources (like our ‘Ten Steps’ guide) that will help you learn from your persecuted family.

You can email your recently elected MP to welcome them to parliament and ask them to make sure freedom of religion and belief is firmly on our government’s agenda.