If your church or home was attacked, how would you view the attackers? You’d probably want those involved arrested and punished. But one church in Sri Lanka is refusing to retaliate. Instead, they are showing love to those who tried to stop them from meeting and worshipping… 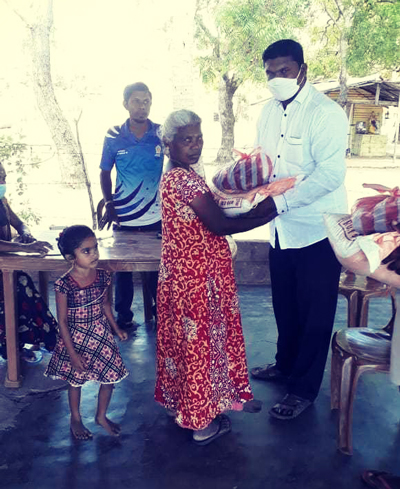 In a village in Sri Lanka’s Eastern Province, a small church led by Pastor Shiyanth* have, for several years, faced strong opposition from its local community. Most people in the area are devout Hindus and don’t want a church in their area. A group had repeatedly tried to shut down the church, but the police reminded them that in Sri Lanka, Christians are free to gather and worship.

Enraged, the villagers decided to take the matter into their own hands.

The villagers chose their moment just as a local believer, Kumar*, was on his way to church. First, two of his cousins began to attack him. Soon, the rest of the mob joined in. Kumar’s wife and three other women from the local church rushed to his aid, only to be beaten up themselves. They were beaten, stoned, and pelted with garbage.

Seven months after this incident, Sri Lanka was put under an island-wide lockdown for over a month. With most of the villagers in this community being from low-income households, and the curfew forcing everyone indoors, people had no means of providing for their families. The church, seeing this great need, stepped in to help: Pastor Shiyanth requested support to provide supplies for the entire village.

Over 100 families received help. Even the people who had attacked believers from the church last autumn received packs of essential goods. They were deeply moved by the gesture. They later discussed this amongst themselves saying, ‘The church could have just helped their own believers. They didn’t have to help us, but they did. Why did we do so much against them?’.

This act of love has opened new doors to reach out to that community. Pastor Shiyanth shared, “Doing this gave us more opportunities to share the gospel and show the love of Christ to people. More people are eager to know the Lord.

“I see a great renewal within the church. Even the local government representative in the village has changed in his attitude towards the Christian community. We are building better relationships with the people now. Thank you so much for your partnership.”

Finally, you can pray now…