Syria: “If you don’t want to be persecuted, don’t evangelise…”

We recently heard from Ibrahim, a Christian living in Aleppo, Syria. Ibrahim works for one of Open Doors many partners in the country, supporting local communities and churches, aiming to bring hope despite war and violence. Ibrahim talked about the work of the church over the last 8 years, but also shared about how, in the midst of the conflict, people are coming to faith in Jesus. Have a read to get inspired, to pray and to act…

We hear stories of people turning to Jesus in Syria – is that happening?

“During the war… people were desperately coming to the church, knowing that churches were safe places. They knew that there was a kind of safe and steady life, a happy life during the circumstances that we were going through. The church was, and is, during the war a reflection of God’s love for people. The church resembled Christ, the people saw Christ through the church.

“Before the crisis in Syria it was considered shameful and rude to have doubts about your faith, it was rude to ask questions and people were very much preoccupied with their daily life. Since the crisis started, all people saw what happened. They got a hard life, they had many questions in their minds, and instead of keeping them in their minds, they started asking. It wasn’t shameful to have questions anymore. We as Christians know that Christ is the only way. Before the crisis, people went to the mosque daily, but since the crisis started, they began to question the Koranic teachings. They started asking if what the self-proclaimed Islamic State was doing, actually came from the Koran. They had doubts about the Koran and about God. Many found their answer in Jesus.” 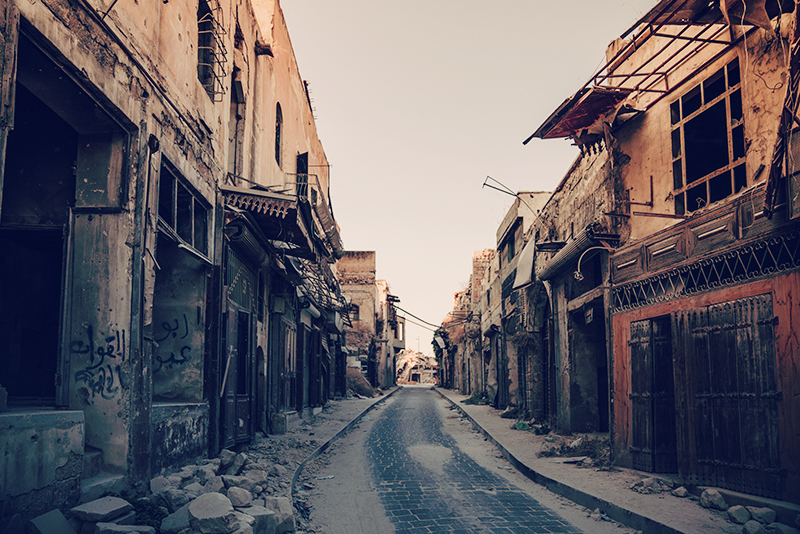 Image: How the war has impacted Aleppo, where Ibrahim is from…

Has that led to persecution?

“If you don’t want to be persecuted, don’t evangelise (share about Jesus). Those who evangelise and bring many to faith, these people and those who convert get into trouble. That can vary from pressure from family, to threats from the community, or even the government. For example, a person we heard of that had become a Christian got into trouble in his village – the people wanted to kill him. He fled the country and is now in Europe.

“Usually the church in Syria is free to do what they want. Only when they start to share openly about Jesus and ask others to follow him do they suffer. A church on the coast was closed because they were doing evangelism, this was back in 2011. Another church in a nearby city was closed for the same reason in 2014. When those church leaders questioned the reason of the closures, they got no answer. I know that one gave away Bibles to university students, the other was sharing about Jesus with people from different backgrounds.

“More recently other incidents have happened. In one place in Syria, a newly converted person started a ministry in a community centre. They had to close the centre as people got angry and upset about such a place. In another place, a new believer from a non-Christian background wanted to get baptised. The family put huge pressure on him, so the pastor opted for baptising him in another country, without the people back home knowing. Some who convert people are not able to attend church because if they are seen, they will get in trouble. Some are insulted, others are threatened, and it could even lead to death.”

God with us: Christmas Syria resource!

We’re just putting the finishing touches on our new, special Christmas resource, God with us. It’s a simple youth / small group resource focussing in on Syria. You can download a copy today, to use in your groups in the run up to Christmas.