Pastor George is one of Open Doors’ partners in northern Syria. Since 2010, he has led a church in Qamishli, one of the cities affected by the military action Turkey has been taking against the area. Because of recent bombings and violence, Pastor George is now supporting the most vulnerable members of his congregation as they face the effects of this new crisis.

What happened in your city the day Turkish army start their attack?

There’s less than one kilometre between Qamishli and Turkey. A massive attack was launched at about 3pm against the Kurdish neighbourhoods. It lasted for almost twelve hours. They restarted the attack the next day at 4pm. That was more vicious, and more bombshells fell on the other neighbourhoods such as the local market, a groceries market and the bakery. It was terrifying.

The next day Qamishli was empty, life stopped, everyone stayed at their homes. We are deep in the city, which wasn’t as affected, but we received several families who left their homes and came to the city. All who asked our help, we helped in the best possible way we could.

The first three days were horrifying. Everyone felt threatened, especially when rumours spread that the Turkish militias might enter the city, or that groups linked to so-called Islamic State (IS) might attack our city. It was terrifying.

How have you been helping people?

When we contacted some people nearer the border, I told them to leave immediately and brought them to my house. Then I bought lots of basic supplies like rice, sugar, canned food, bread, cheese, etc. I tried to provide for the people who left without anything. We prayed together, asking the Lord for peace. Of course the children were afraid, especially my youngest son, but by praying we had a sense of safety. 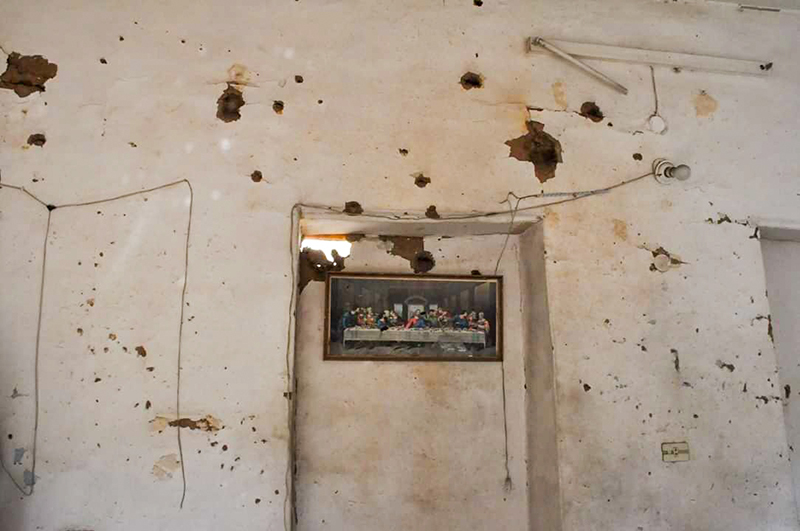 Image: A Christian home in Qamishli, ruined by the bombings. A picture of the Last Supper still hangs on the wall.

Did people want to stay?

The next day, I met with the people of the church. We prayed and worshipped God, and listened to everyone’s opinion. I encouraged those who wanted to stay and tried to strengthen those who were scared. There was a suggestion that we would provide a bus to take people out of the city. I contacted a priest from near Homs – he has a monastery there and was very happy to welcome people from our church.

To be honest, I felt like I wanted to split myself in half, so one half could leave with those who wanted to leave and one half could stay with those who were staying. Eventually, I decided those who were leaving were so scared that I should go with them. Most of them were women and children. The journey took 14 hours, and having me with them, as a pastor, made it easier to get past army checkpoints. After two days, I returned to Qamishli.

How is the situation in Qamishli now?

There is a sense of relief that the crisis has passed. Of course, Qamishli isn’t completely as it was. The markets are not crowded like before. You can sense fear that something more will happen to the city. The effects of the attacks are still felt in the hearts of the people, wounds are not healed yet and some homes are destroyed. Schools are closed but about 80 per cent of the shops re-opened.

Today, I visited Fadi [a Christian injured in the attack], and his mother said to his daughter: “Soon we’ll be back home.” The girl said: “Grandma, we don’t have a home, what are we going back to?” Fear is still there. 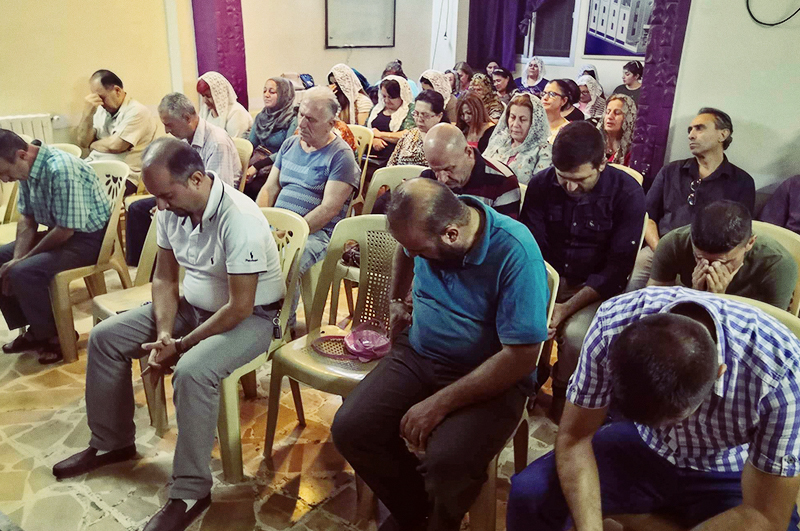 Image: Christians gather in Qamishli after the recent attacks to pray.

How can we pray for you?

I thank everyone who prays for us. I’m grateful for all of you, because God heard your prayers and protected our city. I ask of you, please keep praying for us. Our church is persecuted, and we have been closed many times. We tried to open in a formal building, but were stopped. We meet in a small apartment, and it isn’t big enough for the people. Pray that we can open our church in a bigger building.

Pray for protection for our country. We thank you for your support, you helped us, and especially you made us feel that we have brothers and sisters outside Syria. May God bless you and protect you.

For now, the Turkish government have called a ceasefire, and attacks have stopped. However, the situation is complex and reports of the so-called Islamic State regrouping amidst the chaos are making people nervous. Some of their fighters have recently claimed two car bomb attacks in Syria. Please do pray, and if you can, please give too.

Open Doors church partners on the ground in northern Syria are responding to the emerging crisis, providing vital assistance to those caught up in the fighting.

Will you pray and give today – to meet immediate needs and provide long-term support for your Christian family in Syria? Just £9 could provide emergency relief for a family that would last a week…

Join the Blackout to stand with Christians in Syria…

Sign up to go screen free and get sponsored to shut down your devices for anything from 6 to 48 hours. Raise money, prayer and awareness for silenced, persecuted Christians like those who are having to flee due to fighting in Syria. Sign up and get a free pack!

Main image: A Christian home in Qamishli after one of the recent attacks…