Today marks seven years since the war in Syria began. It all started with a small uprising after some graffiti was sprayed on a wall in a rural town. Now the conflict has engulfed the entire country, and Iraq too. But, thanks to your amazing fundraising, gifts and prayers throughout 2017 Open Doors partners were providing food and hygiene kits to 17,000 families every month.

Around five million people have left Syria since the war began, but six million are displaced within Syria itself. Of those who remain, some are simply too old, unwell or poor to leave, and continue to need support, while others have chosen to stay and serve those in need. 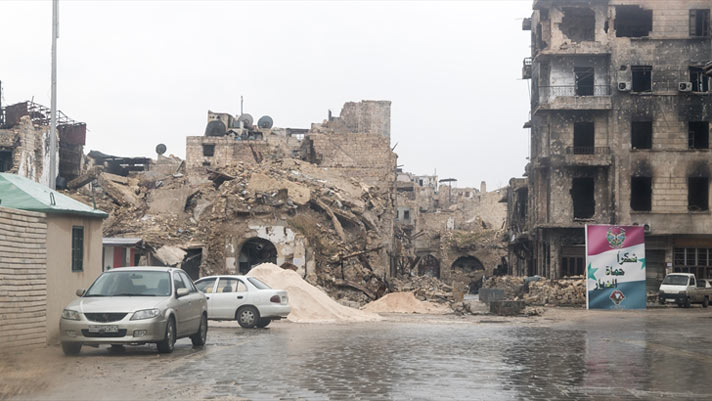 One man from Aleppo spoke to an Open Doors contact about the difficulties of deciding whether to stay or leave. His wife is pregnant, and they have had two children during the war. He said, “In our road the war is finished. But during the war it was very difficult to live with these bombs. Two bombs hit our apartment building. Here in this street maybe a hundred hit. I don’t know the number, a lot of bombs came down here in the war.

“But we live in God. We stayed with our faith. We prayed as a family here. We went to the church. I don’t believe that we should just travel and run out. Of course we thought a lot about leaving, about searching for a visa. A lot of countries gave me a visa, but when I started to pack my bags, I wanted to stay. I love my country. I love my people. I have a mission to stay here and help people.”

The area was bombed and I lost everything

The war has made it difficult for people to support themselves, as many families have had to flee their homes and leave their businesses and sources of income behind, or their businesses have been destroyed by bombs.

Yacoub Habib was fairly well-off, but now depends on support from a local church. He said, “I had my own company in Aleppo. I had a good life, had my own house, a car, and I invested money in the factory. In 2013, the area was bombed and I lost everything. I ended up in this apartment.”

The apartment is simply furnished; it lacks almost all basic things. His bed is a mattress on the floor. He heats the apartment by burning paper in the stove, paper he collects in the streets. “I was so ashamed. In the first months I hid myself inside. I kept the windows closed, and didn’t really take care of myself. I started smoking and drinking. I was big, now I am nothing,” he said.

With the help of the church, Yacoub received some furniture and was able to get his life back in order. “I hope and pray I can work again, but I have no money to start a new factory.”

Open Doors partners have started various projects to provide jobs for people in Syria, so they can have dignity of supporting themselves and their families. With support from Open Doors, Father Tahan (pictured below) was able to start two pharmacies, creating jobs for several young pharmacists. “The people need jobs to be no longer dependent on food packages and other help,” he said. 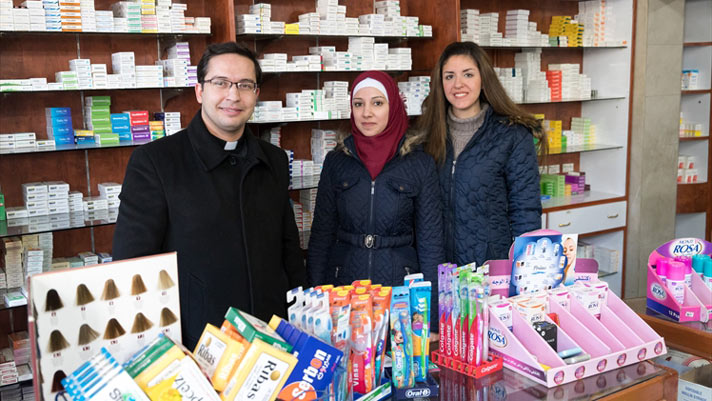 Christians in Syria also wish to begin the work of bringing reconciliation to their communities. Father Sami, a Jesuit priest, says, “We opened a clinic, distribution and educational centre in Eastern Aleppo. It is the first time that the church has had a presence in this Muslim area. This is the time to be open instead of closed,” he said.

Bring hope to the Middle East…

Thanks to your prayers and support, Open Doors has been working in Syria through local churches and partners since before the war began, and we will continue to support our church family in Syria for as long as they need us. Alongside vital aid such as food and long-term projects such as creating jobs, Open Doors partners are repairing homes, providing medicines and medical care, providing training and trauma care, and distributing Bibles and Christian books.

Open Doors has launched the Hope for the Middle East campaign, a global, seven-year campaign mobilising people around the world to stand with Christians and other minorities in Syria and Iraq. Here’s how you can help to bring hope to the Middle East:

Pray: Pray for wisdom for those are considering whether to stay in Syria or try to leave. Pray for comfort and provision for those who are too sick or old to leave, and that God will continue to use Open Doors partners to reach out to them. Pray for hope and new opportunities for people like Yacoub, who have lost everything. Ask God to bless projects like the pharmacies , and use them to restore hope and dignity to those who are desperate to work and support themselves again.

Raise money: Download our free ‘Walk, bake, ride run… With Them’ fundraising pack and do what you love to raise money, prayer and awareness for Christians in Syria and across the Middle East.

Give now, if you can: Donate money to help rebuild hope in Syria. Any amount you can afford can go towards rebuilding homes or restoring livelihoods in Iraq and Syria.