In the central highlands of Vietnam, churches have been getting together to solve longterm problems for their communities by building wells and creating a supply of fresh and clean water.

In these areas, water can be scarce. During summer, when the climate is extremely hot and dry, there is barely any rain for five to six months. Droughts have occurred regularly and peoples crops (their source of food and income) can’t survive. In some years, there was not even enough water for drinking and cooking.

Many in the region travel at least an hour to get water for cooking – but the lack of water means there’s not enough for daily washing, which can see illness and skin conditions develop.

The church sees a need 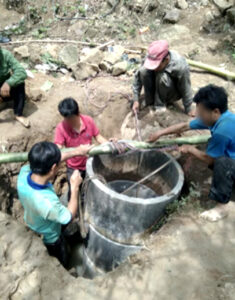 In one of the villages, there is a small Christian community, and for years they have faced discrimination and persecution from the other villagers and authorities. After praying together the group asked God to help them find a solution to the community’s problem – and the dream of drilling a well started began.

The church is small, and it’s members poor, so they didn’t have money or resources to see the well built. But they didn’t give up and stepped out in faith to raise the money, sharing the idea with other church leaders.

A local pastor, who is also an Open Doors partner, heard about the project and got involved, providing the remaining money needed to build the well.

Once the well was drilled, there was enough water for the whole community, and the church insist it is open for everyone – Christians and non-Christians.

What’s more, since there was extra money raised, the leaders used it to buy two big water tanks and attached an electronic motor to automatically store and release water.

The well now supplies around 150-200 people with the daily water needs – there is enough for cooking, drinking, and washing.

Many of the community’s problems were solved. No more long walks just to get water down in the valley, no skin diseasesand enough water for drinking and cooking.

As a result, the villagers’ previously hostile attitude towards the church and local Christians changed. 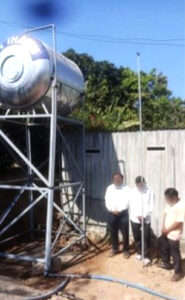 “On behalf of the community, we would like to thank you so much, to your church, for building this well for us,” said one of the villagers to brother Dung*, the local Open Doors partner.

She added, “Since we had this well, we haven’t gotten any skin problems at all. We don’t have to worry about the water we need during the hot season.”

Pastor Dung adds, “The church was so blessed by their act of faith. They became well-known in the community. The local authority stopped persecuting them as well as the villagers,” says Dung.

The water well project in Vietnam started in 2016, and last year Open Doors local partners funded five wells in different villages serving about 1,000 villagers. The wells are known to be built by Christians, which has become a testament of God’s goodness.

Father God, thank you for church communities in Vietnam who are committed to serving their communities, despite persecution. Thank you that the wells are meeting needs and helping people stay healthy. I pray these Christians communities would be known as loving and kind and that their example would lead many people to come to know you. Amen.